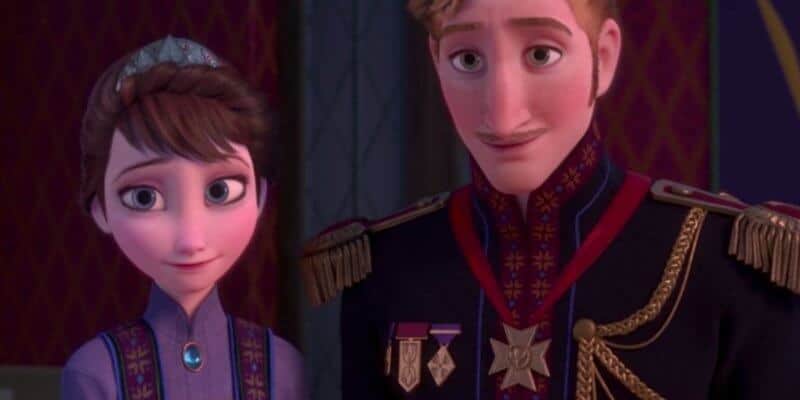 After watching Frozen 2, Disney fans everywhere were begging to know more about Anna and Elsa’s parents after being teased with their epic love story. Well, Disney is now giving us all the details!

Disney is releasing a Frozen 2 novel called Dangerous Secrets: The Story of Iduna and Agnarr that will expand on the story we began to learn of in Frozen 2. Disney Books has released an Instagram post noting that the book has been released, with a small plot synopsis that has us wanted to purchase the prequel.

Elsa and Anna’s mother grew up in Arendelle with a dark secret–she’s Northuldra. Read her story in this new #Frozen2 novel.
.
Search for the novel on DisneyBooks.com. Link in bio or tap on the tag in the photo to shop.
.
About the Book:

Sixteen-year-old Iduna harbors a dark secret. On the surface, she is an Arendellian village girl, an aspiring inventor, and the best friend of Prince Agnarr, but she is also secretly Northuldra.

Ever since the day the forest fell, Arendellians have despised and distrusted Northuldra with a vengeance. No matter that the Northuldra—along with some of Arendelle’s own—have been trapped in the Enchanted Forest behind an impenetrable wall of mist since the day of the battle.

Iduna doesn’t know why the mist refuses to part, or why it descended to begin with. The only clear thing is that she must keep her identity from everyone, even Agnarr. Her life depends on it.

Fortunately for her, Agnarr doesn’t know that Iduna is the Northuldra girl he saw seemingly flying on a gust of wind all those years ago, the day of the celebration turned disaster. The day Agnarr lost his father, the king. The day Agnarr himself almost died.

What Agnarr does know is that Iduna is a true ally in the face of his royal responsibilities and the expectations of an overbearing council and a well-meaning regent who will rule in Agnarr’s place until he turns twenty-one and assumes the Arendellian throne.

As Iduna and Agnarr grow ever closer, however, friendship is no longer enough. If only falling for each other didn’t mean risking their futures: Iduna’s as a hidden-in-plain-sight citizen of Arendelle, and Agnarr’s as imminent king.

But for a chance at true love, the risk might be worth taking.

If there is something all Disney fans love, it’s a good love story, and that is exactly what Iduna and Agnarr had. It seems that Anna and Elsa’s parents had a sort-of “Romeo and Juliet” love story where they were star-crossed lovers, which definitely makes for an intriguing story.

Although this has not been mentioned, it would be really interesting to see if Disney would consider creating the prequel and the next Frozen 3 film. Of course, this means we would be missing our favorite characters such as Olaf, Kristoff, Sven, Anna, and Elsa, it would be an interesting take on the franchise. In my opinion, I think this could be a great 30-minute feature for Disney+ to release.

Will you be buying the new Frozen novel?