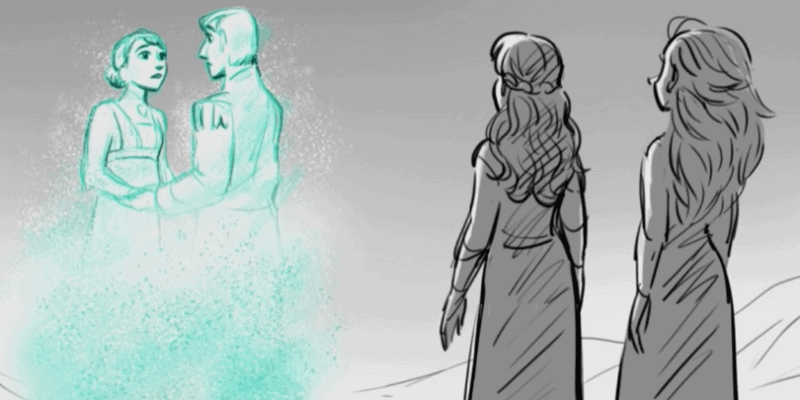 Frozen 2 directors Jennifer Lee and Chris Buck have released another deleted scene, but you might want to grab some tissues before watching this one.

Titled “A Place of Our Own,” the scene answers questions that Anna and audience members had about her and Elsa’s parents, King Agnarr and Queen Iduna. Particularly: Why did Anna get shut out of Elsa’s life for so long?

“Anna was struggling so much in earlier versions [of the movie] with ‘Did my parents really trust me? Why was I shut out?'” Lee says in the video. “She still had questions she needed answers for…We loved this idea that after Ahtohallan, Elsa could give her a memory that would tell her how her parents felt about her.”

You can watch the full video and deleted scene here:

The scene follows the major them of Frozen 2 that “water has memory.” Elsa is able to use her powers to replay a conversation her parents have right before they sail off to their demise. Anna watches as her mother convinces her father to let her back into Elsa’s life. Ann learns that her parents recognize that she had matured and that if anybody could help Elsa, it was her. Anna and the audience learns that the couple intended to end their daughters’ separation as soon as they returned.

Agnarr: “You may be right about that. There’s not much that girl can’t do.”

Iduna: “Her love could hold up the world.”

Agnarr: “Lucky for the world. OK, we’ll tell her when we return.”

Anna watched as tears streamed down a smiling face. She embraced Elsa thanking her. Elsa simply said, “They believed in you and so do I.”

Now, the film’s final version still had Elsa instilling her trust in Anna, giving her the crown before taking on her new role. But, perhaps this deleted scene could have added power to that moment. Lee and Buck fail to mention why “A Place of Our Own” did not make the final cut, but it is still a treasure that all Frozen fans can enjoy. We are grateful that they decided to share it with us along with the other deleted songs they recorded.

Frozen 2 will be available on all digital platforms on Tuesday, and on Blu-Ray February 25, 2020.

What do you think of this deleted scene? Do you think they still could’ve added it to the final cut? Let us know in the comments!