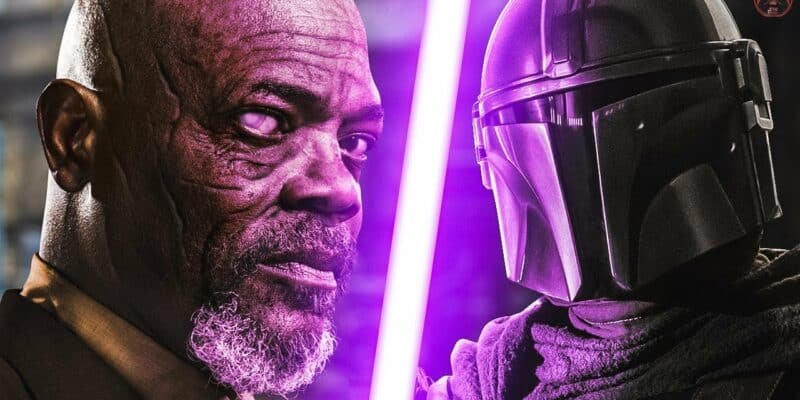 The Mandalorian is amping up for its episodic third and final season, but Star Wars legend Samuel L. Jackson just made a massive hint that his Mace Windu character wants to return.

Every Star Wars fan has theorized what happened to Jedi Master Mace Windu after having his hand cut off by Jedi Knight Anakin Skywalker (Hayden Christensen) and shot out of Chancellor Palpatine’s (Ian McDiarmid) suite on Coruscant.

Did Windu survive? Many have long hoped that the legendary Jedi Master would make his grand return to the Star Wars universe, but their dreams might finally come true.

The key to this master plan is The Mandalorian, and The Book of Boba Fett director Bryce Dallas Howard, a Star Wars figure that fans hold in the same regards as George Lucas and Dave Filoni in many ways.

When Samuel L. Jackson was asked if there’s any possibility that Mace Windu will return to Star Wars on Josh Horowitz’s Happy Sad Confused interview, he responded:

“Definitely. There’s a huge history of people with one hand returning in Star Wars… The only person I’ve ever said that to about coming back was Bryce Dallas Howard, ’cause I just did a movie with her. And she directs episodes of The Mandalorian, so, ‘You think you might be able to hook a brother up? I mean you like me, right?’ She’s like, ‘I love you, you’re amazing!’ So, ‘Put me back in there… Put me in, coach, I’m ready!’ You know, I’ll learn to lightsaber left-handed. Come on, hook me up.”

While on set with Bryce Dallas Howard for Henry Cavill’s ARGYLLE (2022), Samuel L. Jackson came to Howard to “hook a brother up” and “put me in” to the next Mandalorian season.

It’s been 28 years in the Star Wars universe since Mace Windu fell through the cityscape of Coruscant to the event of The Book of Boba Fett.

Assuming that Star Wars The Mandalorian season three takes place directly after The Book of Boba Fett in 9 ABY, Mace Windu would be 81 years old if he were to return alongside bounty Din Djarin/Mandalorian (Pedro Pascal) and Cara Dune (Gina Carano).

Many assumed that rather than Luke Skywalker (Mark Hamill) finding Grogu at the end of The Mandalorian season two, Mace Windu would ignite his magenta lightsaber and slice through the dark troopers.

Many will argue that Mace Windu’s legacy ended in Star Wars: Revenge of the Sith (2005), but his return is unavoidable in this new age of Star Wars.

Fan movements led to the “Snyder Cut” being released, as well as Tobey Maguire and Andrew Garfield’s episodic return to the Marvel Universe in Spider-Man: No Way Home (2021). On top of that, fans are to thank for the epic return of Ewan McGregor and Hayden Christensen in Obi-Wan Kenobi, a revolution that’s taken place for 17 years since the Revenge of the Sith ended.

With Samuel L. Jackson coming out so boldly to Lucasfilm by saying, “‘Put me back in there… Put me in, coach, I’m ready!” indicates that he’s not given up that Mace Windu survived the events of Order 66 and after that.

His return in The Mandalorian would need to be supported by a highly motivated and natural storyline, which isn’t forced or unnatural for his character. Bryce Dallas Howard would be the director to trust to showcase the return of Windu, and fans are with her.

Do you think Mace Windu should appear in The Mandalorian? Let us know in the comments below!