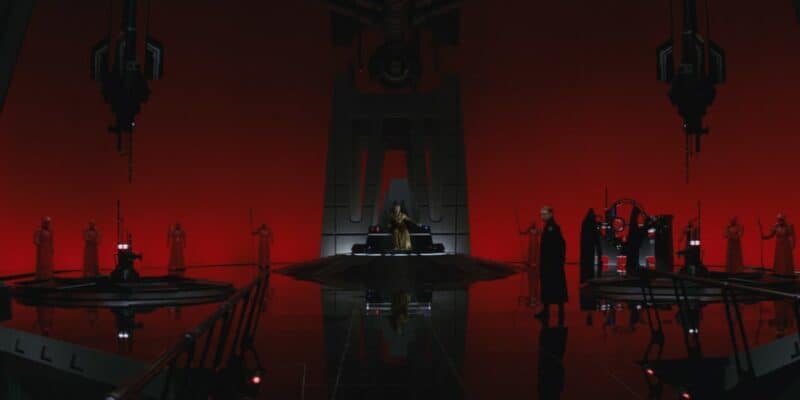 Although Jon Favreau and Dave Filoni’s The Mandalorian is set approximately 25 years before Disney’s sequel trilogy in the Star Wars timeline, new reports indicate that villains from the trio of films may be returning in the third season of Din Djarin (Pedro Pascal) and Grogu’s adventures.

As it turns out, it looks like the First Order’s Praetorian Guard could be making a comeback. Star Wars scooper Making Star Wars says it heard the Guard was making a return in a scene where Din Djarin (Pedro Pascal) fights them aboard a ship. The scoop also says Mando bumps into a group of new antagonists that looks like the red Sith Troopers, but here, they have Mandalorian-shaped helmets.

Clad in ornate crimson armor, these warriors guarded Supreme Leader Snoke, ready to meet any threat with a savage response. The Guard consisted of eight sentinels divided into four pairs, with each pair brandishing unique weapons. Their red armor was a deliberate echo of that worn by Emperor Palpatine’s royal protectors. The Guard attacked Kylo Ren and Rey after the death of Snoke, with all eight falling in battle.

While it is not yet known if Snoke himself will appear in The Mandalorian Season 3, Favreau and Filoni have spent a great deal of time exploring cloning in their corner of the Star Wars galaxy. Filoni even gave viewers a glimpse of a Snoke-like being in his animated Star Wars: The Clone Wars spinoff, Star Wars: The Bad Batch, last year.

At this time, exact details of The Mandalorian Season 3 are not known, though it is rumored to debut in December 2022. Star Wars fans recently saw the returns of many Mandalorian fan-favorites — Djarin, Grogu, Marshal Cobb Vanth (Timothy Olyphant), Ahsoka Tano (Rosario Dawson), and Jedi Knight Luke Skywalker (CGI Mark Hamill/Graham Hamilton) — in The Book of Boba Fett.

Their returns set up several potential storylines for the third season of the hit series, and it is a foregone conclusion that the Darksaber will continue playing a role as Bo-Katan Kryze (Katee Sackhoff) and Moff Gideon (Giancarlo Esposito) come back to the Star Wars story.

In addition to The Mandalorian Season 3, fans of the “Mando-Verse” can look forward to spinoff Ahsoka sometime in 2023.

What do you think about the Praetorian Guard seemingly returning in The Mandalorian?