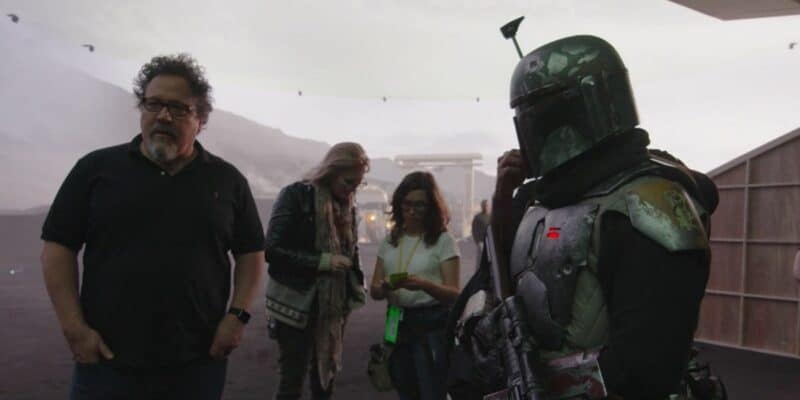 Even though Jango Fett’s son spoke only four lines in the original trilogy, he was cemented as a Star Wars icon. For decades, fans clamored for more of the legendary character — and, then, last year, Mandalorian showrunner Jon Favreau and executive producer Dave Filoni delivered.

Fett — now played by Temuera Morrison (Star Wars: Episode II – Attack of the Clones, Moana) — made his triumphant return to the Star Wars universe in Robert Rodriguez’s The Mandalorian Season 2, Episode 6 (“Chapter 14: The Tragedy”), delighting fans and giving them the “bada** version” of Boba Fett they’ve wanted for four decades.

Now, however, the original VFX artist behind Fett’s beskar armor is speaking out about Favreau and Filoni’s decision to unmask the Kamino native, and he’s not happy about it. Speaking to The New York Times, Joe Johnston shared, in no uncertain terms, that he disagreed with the Mandalorian creative team’s decision:

“I never would have shown his face. I would never have had an actor underneath where he takes the helmet off and you see who it is. I think that eliminates a lot of the mystery. Before that helmet comes off, he can be anybody.”

Now, the character is set to return on Wednesday, December 29, 2021 in his very own series.

Fett will be fully unmasked as he takes on the Star Wars galaxy’s criminal underworld, not acting as a lone wolf for the first time in his 40+ year history. Favreau recently shared:

“Although Boba Fett is a very experienced bounty hunter, he’s not experienced at running a criminal syndicate or managing forces,” Favreau pointed out. “He’s not normally a newcomer. He’s an expert as we see him in most areas. But in this case, he’s trying to transition to another position.”

While few details are known about the exact plot of the series — except for showrunner Rodriguez’s assertion that it will “overdeliver” and “blow minds” — Star Wars fans are anticipating a few key appearances from popular Star Wars characters, including, perhaps, Mark Hamill’s Luke Skywalker and Grogu, Emilia Clarke’s Qi’ra and Crimson Dawn, Pedro Pascal’s Din Djarin, Timothy Olyphant’s Marshal Cobb Vanth, and, of course, a young Han Solo — CGI, of course — Rodriguez and his all-star cast of directors have yet to confirm any details regarding special appearances by Star Wars fan-favorites.

What do you think about Boba Fett being unmasked as the Star Wars story moves forward?