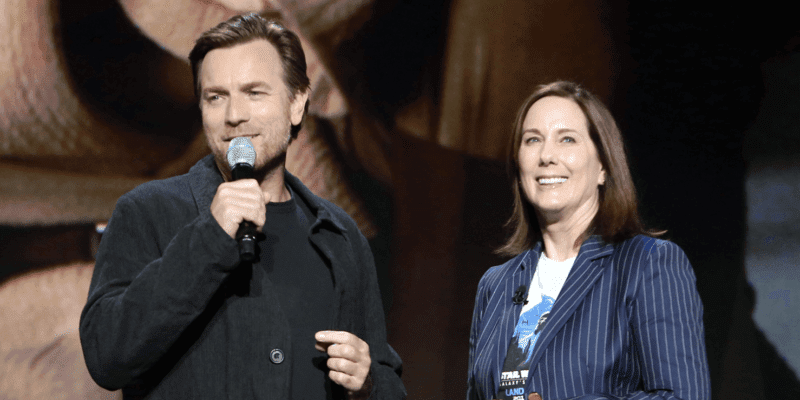 The Mandalorian is one of the most popular streaming series and considered some of the best Star Wars media since Star Wars: Episode III – Revenge of the Sith (2005). Series lead Din Djarin (Pedro Pascal) stole the show in The Book of Boba Fett, producing an uproar from fans ecstatic to see the deadly bounty hunter.

Now, Lucasfilm’s Kathleen Kennedy confirms that the worlds of Obi-Wan Kenobi (Ewan McGregor) and the Mandalorian could converge into yet another crossover soon:

#TheMandalorian producer Kathleen Kennedy has addressed #ObiWanKenobi’s potential crossover with other Disney+ shows: “All of that falls within the Mandalorian timeline…”

#TheMandalorian producer Kathleen Kennedy has addressed #ObiWanKenobi's potential crossover with other Disney+ shows: "All of that falls within the Mandalorian timeline…" Full quotes: https://t.co/aOtBx96gep pic.twitter.com/HWaqbcLvtI

Considering that when fans last saw Mando, Luke Skywalker had experienced the death of his masters, Yoda (Frank Oz) and Obi-Wan Kenobi (Sir Alec Guinness), as well as witnessed the death of his father, Anakin Skywalker (David Prowse), in Star Wars: Episode VI – Return of the Jedi (1983). The stoic Jedi Master was last teaching his young student, Grogu, on a remote planet with Star Wars character Ahsoka Tano (Rosario Dawson) overlooking them.

With Luke Skywalker being born in 19 BBY (Before the Battle of Yavin) and Din Djarin being saved by Death Watch under Bo-Katan’s lead in that same year, Djarin has a few years on Skywalker. Din Djarin was reportedly born between 30-27 BBY, meaning he’s 36 to 39 years old as of The Mandalorian and The Book of Boba Fett, making Skywalker 28 years old at this time.

As a result, there’s about a ten-year gap between Mando and Luke Skywalker, meaning that any appearance of Din Djarin in Obi-Wan Kenobi would be a young boy, not the character fans see today’s series.

But, considering that Kathleen Kennedy revealed that all upcoming Star Wars Disney+ series fall “within the Mandalorian timeline,” it’s clear that the Skywalker Saga no longer revolves around the Orignal Trilogy.

“…the strongest connective tissue for us is to the prequels, because that’s where our characters are coming from and that’s where their stories started. So, really, the prequels are the most connected to our series.”

As a result, it’s more likely that fans will see Kenobi appear within an upcoming Mandalorian project, such as Ahsoka, that takes place before (and theoretically after) the death of Ben Kenobi.

Nonetheless, fans are in for one of the most significant pieces of Star Wars media since Revenge of the Sith with Obi-Wan Kenobi.

Do you want The Mandalorian and Obi-Wan Kenobi to crossover? Let us know in the comments below!