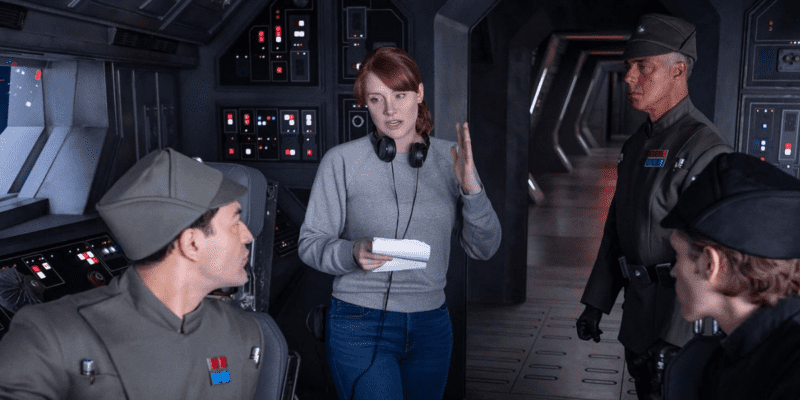 Every Star Wars fan was on edge after Samuel L. Jackson dropped a major hint that he wants Jedi Master Mace Windu to return in The Mandalorian, and Bryce Dallas Howard just seemingly confirmed it.

Every Star Wars fan has theorized what happened to Jedi Master Mace Windu after having his hand cut off by Jedi Knight Anakin Skywalker (Hayden Christensen) and shot out of Chancellor Palpatine’s (Ian McDiarmid) suite on Coruscant.

Did Windu survive? Many have long hoped that the legendary Jedi Master would make his grand return to the Star Wars universe, but their dreams might finally come true.

When Samuel L. Jackson was asked if there’s any possibility that Mace Windu will return to Star Wars on Josh Horowitz’s Happy Sad Confused interview, he responded and highlighted Bryce Dallas Howard:

“Definitely. There’s a huge history of people with one hand returning in Star Wars… The only person I’ve ever said that to about coming back was Bryce Dallas Howard, ’cause I just did a movie with her. And she directs episodes of The Mandalorian, so, ‘You think you might be able to hook a brother up? I mean you like me, right?’ She’s like, ‘I love you, you’re amazing!’ So, ‘Put me back in there… Put me in, coach, I’m ready!’ You know, I’ll learn to lightsaber left-handed. Come on, hook me up.”

Howard, director of select The Mandalorian and The Book of Boba Fett episodes, has since seen the interview snippet where Jackson hilariously brings up her name and responds with a cryptic Tweet:

Replying with just three emoji eyes, Bryce Dallas Howard was both shocked and flattered by Samuel L. Jackson’s response to whether or not his Jedi Knight will return to the Star Wars galaxy.

While it’s unclear what Lucasfilm has planned for the future of Jackson’s character, it seems that Bryce Dallas Howard, a Star Wars fan-favorite, is on board to bring her ARGYLLE (2022) co-star back into the world of George Lucas.

However, not every fan is on board for a Mace Windu appearance in The Mandalorian season three:

Please don’t. Bringing him back would undermine Anakin’s fall to the darkside. Mace’s death was the final event that pushed him over the edge.

Please don’t. Bringing him back would undermine Anakin’s fall to the darkside. Mace’s death was the final event that pushed him over the edge.

PLEASE NO. Stop ruining the prequel story! The whole reason he died was to conclude the transformation of Darth Vader…Anakin

PLEASE NO. Stop ruining the prequel story! The whole reason he died was to conclude the transformation of Darth Vader…Anakin

These opinions, however, seem to make up a small minority of comments to Howard’s mysterious Tweet, as many fans ready for a Windu and Anakin Skywalker (Hayden Christensen) — who’s returning to the Star Wars galaxy in Obi-Wan Kenobi for the first time in 17 years — rematch.

Fans will have to wait and see if these rumors pan out to be accurate, and, if so, will Mace Windu get his series set before or after the fall of the Jedi Council from Order 66.

Do you want Mace Windu to return to Star Wars? Let us know in the comments below!