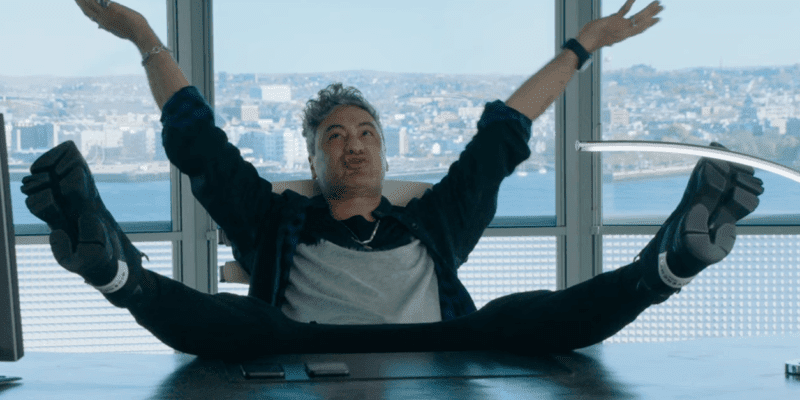 Marvel fans cannot get enough of director Taika Waititi. His brilliant humor debuted in the Marvel Cinematic Universe with Thor: Ragnarok (2018). Waititi is credited with saving the Thor franchise after dismal returns on Thor: The Dark World (2013). And the New Zealander recently revealed how close MCU fans came to missing out in all the fun.

Taika Waititi sat down with James Corden (Amazon’s Cinderella) on The Late Late Show with James Corden to reveal the harrowing tale of how he managed to snag the chance to direct Chris Hemsworth (Thor), Tom Hiddleston (Loki), Mark Ruffalo (Hulk/Bruce Banner), and Tessa Thompson Valkyrie) in Ragnarok.

Sitting beside voice actress and comedian Pamela Adlon, he recounted the series of events. It began with his attempt to board a domestic United States flight with only his New Zealand ID card after a friend, and he went to Hawaii for his birthday. His friend headed back to New Zealand with Waititi’s passport in his luggage.

Waititi recalled how the TSA laughed at his New Zealand Driver’s license, which “looked like it came out of a corn flakes box.” However, Waititi went to the airport anyway, determined to find any way to make his meeting with Marvel Studios boss Kevin Feige.

Lucky for the filmmaker, he had a miracle stashed away in his bag. A signed contract from the Walt Disney Company for his work on the Moana script. He was the first writer to sign onto Moana. Luckily the TSA agents in Hawaii were fans of the Disney Animated film and let him board his flight.

But his troubles were not over yet. Taika Waititi also revealed that once he was in the room, he had to lie through his teeth to land his dream gig. His previous experience with films like What We Do in the Shadows (2014) and Boy (2010) has much smaller budgets. And his last involvement in the superhero genre ended in disaster with Green Lantern (2011.

To which Waititi said

Now, Waititi is a household with films like Jojo Rabbit (2019) under his belt. He recently reunited with Ryan Reynolds in Free Guy, now streaming on Disney+. And is working on Pixar’s Lightyear. He also is ready to rock the Star Wars franchise. His next film in Marvel Phase Four will be Thor: Love and Thunder (July 8, 2022).

The film will reunite the God of Thunder and Jane Foster (Natalie Portman) as the Mighty Thor. Lady Sif ( Jamie Alexander) is also returning alongside the Guardians of the Galaxy. Russell Crowe will also appear as Zeus, and rumors suggest the Wakanda God Bast will appear. And Christian Bale will play the villain Gorr the God Butcher.

Let us know in the comments if you cannot wait for more Taika Waititi in the Marvel Universe.