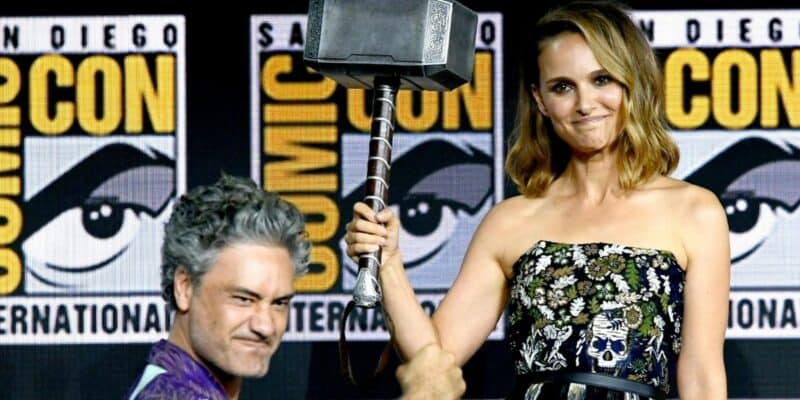 Taiki Waititi is the people’s champion with his Marvel Universe and Star Wars galaxy takeover. The director is constantly teasing fans about his upcoming Thor: Love and Thunder (2022) ahead of its debut, but in a turn of events, it seems that the director just got a tattoo of Natalie Portman’s Marvel character.

Waititi never disappoints, especially when it comes to The Mandalorian, Marvel Cinematic Universe, or The Flight of the Conchord spin-offs like Our Flag Means Death.

Waititi became a household name after directing Thor: Ragnarok (2017) and Jojo Rabbit (2019). The Marvel alum is returning to the director’s chair for Thor: Love and Thunder that’s hitting theaters later this year.

Waititi’s multiple teases of Thor: Love and Thunder indicate that Natalie Portman’s Jane Foster character might be taking the “God of Thunder” crown from Thor (Chris Hemsworth). Apparently, the character stuck with Taika Waititi as the director just got a “Jane” tattoo:

Taika Waititi has received a “Jane” tattoo ahead of Jane Foster's return in #ThorLoveAndThunder: https://t.co/Nx83e5vcDV pic.twitter.com/iZKY5PIvJ6

While many assumed that this “Jane” tattoo was for Waitit’s beloved dog, even Chris Hemsworth’s personal trainer, Luke Zocchi, seemingly confirmed that this new ink was for Jane Foster by responding: “I know this [is] story amazing.”

Waititi then responded, “a chosen few know the story.”

Natalie Portman has been under fire after reported personal conflicts resulted in the actresses’ tumultuous role in Thor: Dark World (2013) and then the apparent absence in later Marvel movies.

Nonetheless, Portman is front and center in the future of Marvel and the multiverse.

Every Marvel fan seems lost on this new Waititi tattoo, but the director couldn’t wait to share it on social media.

Jane Foster’s role in Thor: Love and Thunder must be pretty significant for director Taika Waititi to get a tattoo of the character’s name on his knuckles!

What do you think Taika Waititi’s tattoo means? Let us know in the comments below!