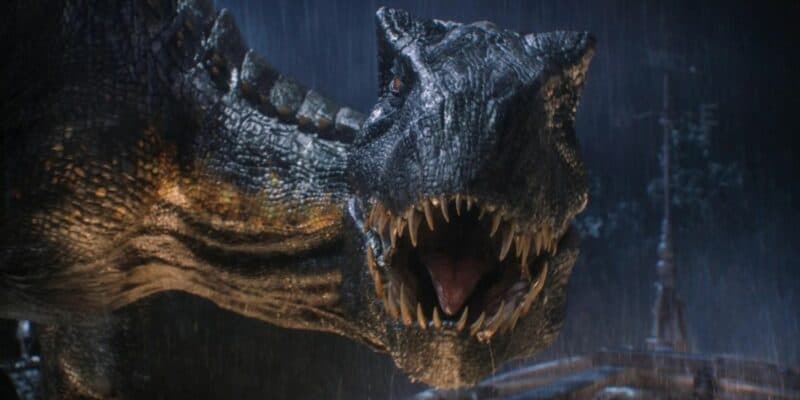 There are many jaw-dropping moments throughout the Jurassic Park franchise, from vehicles being attacked by dinosaurs to humans being stalked through dark kitchens, and from shocking character deaths to the realistic dinosaurs themselves.

But there are none that are quite as entertaining to watch as the dinosaur battles. Every movie in the series has its fair share of prehistoric royal rumbles, but we’ve decided to rank all seven battles — the Jurassic World Dominion prologue included — from worst to best!

The easiest choice on this list has to be The Lost World: Jurassic Park (1997), the first sequel to Steven Spielberg’s blockbuster masterpiece Jurassic Park (1993). The 1997 sequel finds Dr. Ian Malcolm (Jeff Goldblum) thrown back into the mix with dinosaurs, as he races to save his girlfriend Dr. Sarah Harding (Julianne Moore) from InGen’s second island Site B/Isla Sorna.

During the film’s third act, moments before our team of heroes are rescued by helicopter, they’re stalked relentlessly by a pack of velociraptors in the island’s abandoned worker village. Sarah Harding, who has done the smart thing (for once) of making it up onto the roof of an old maintenance shed, thinks she’s outsmarted her pursuers when she comes face to face with one.

Quickly deciding that she doesn’t want to become supper, Sarah removes the tile-panelling beneath the raptor’s feet, sending it crashing into another raptor on the ground below, thus resulting in an entertaining but criminally short-lived fight between the two dinosaurs. The biggest positive, though, is that this altercation allows Sarah to escape with her life.

Next on our list is Jurassic World: Fallen Kingdom (2018), the direct sequel to Jurassic World (2015), which finds Claire Dearing (Bryce Dallas Howard) and Owen Grady (Chris Pratt) heading to Isla Nublar with a military escort in an attempt to rescue 12 species of dinosaurs from a pending volcanic eruption. The third act, however, takes place entirely indoors.

After an illegal dinosaur auction goes terribly wrong, Claire, Owen, and Maisie Lockwood (Isabella Sermon) are chased throughout the gothic Lockwood Manor by a genetic dinosaur hybrid known as the Indoraptor. But when they’re cornered on a rain-battered skylight by the monster, Blue the raptor comes to their rescue.

Blue, protective of Owen, who hand-reared her along with three other raptors, attacks the Indoraptor, and the two battle it out on the glass. Before long, they go crashing down into the museum, where the hybrid dinosaur becomes impaled on the horn of a triceratops’ skull. Unfortunately, this dinosaur battle feels as short-lived as the Indoraptor’s time in the film.

The film is only five minutes long, which is even shorter than the other Colin Trevorrow-directed Jurassic short, Battle at Big Rock (2019). The prologue, however, takes us back 65 million years to see dinosaurs in their natural habitat, on a sun-baked Cretaceous landscape where herds of Nasutoceratops and Apatosaurus and a flock of Quetzalcoatlus dominate the scenery.

But before we jump forward to the present day, where “Rexy” is being chased by authorities through the Sierra Nevada Forest, we’re treated to a dinosaur battle between a Giganotosaurus and Rexy’s ancestor, who, with her feathers, is a lot more paleo-accurate. While it’s yet another short-lived battle, as the Giga takes the rex down in seconds, it’s still well executed.

Along with Claire, Owen, Maisie Lockwood, and ex-air force pilot Kayla Watts (DeWanda Wise), and Biosyn whistle-blower Ramsay Cole (Mamoudou Athie), our Jurassic heroes must infiltrate Biosyn HQ in Italy’s Dolomites. However, in true Jurassic fashion, getting out isn’t going to be a walk in the park, as they come face to face with Biosyn’s Giganotosaurus on the runway.

Luckily, Rexy comes to their rescue, this time accompanied by the terrifying Therizinosaurus. An epic, rain-soaked battle ensues, but while the extended edition gives us more context to this “round two” by reinstalling the prologue, it’s inexplicably short-lived, as Rexy simply nudges the Giga onto the Therizino’s enormous claws within what feels like seconds.

It’s near impossible to have any Jurassic Park ranking without some measure of controversy. Enter Jurassic Park III (2001), which, even with the likes of Jurassic World: Fallen Kingdom and Jurassic World Dominion being received with prickly receptions from fans and critics, remains the most hated movie in the entire franchise to date.

Love it or hate it, Jurassic Park III does a lot of stupid things, but the most divisive aspect of the film is the battle between the Tyrannosaurus Rex and the film’s main antagonist, the Spinosaurus. Fans were in uproar (pun most definitely intended) when the Spino ended up swiftly besting the rex, earning its right as the king of Isla Sorna’s jungle.

T-Rex is widely considered a hero in its own right where the Jurassic Park films are concerned, although the rex in Jurassic Park III isn’t the same one in the original, as the film is set on InGen’s second island, Site B. Nevertheless, fans are yet to forgive this outcome, despite the fact that it’s an incredibly-framed battle. The real negatives? It’s yet another short-lived dinosaur battle.

Unfortunately, the original Jurassic Park hasn’t made it to the top of our list, but we’re not ranking the movies — we’re ranking the dinosaur battles. And second place is a great place to be, unless everything below first place is terrible all round. In the case of Jurassic Park, of course, that simply isn’t true.

When Grant, Ellie, Lex Murphy (Arianna Richards), and Tim Murphy (Joe Mazzello) find themselves surrounded by a pack of raptors in the Visitor Center museum, it seems that all hope is lost — until the Tyrannosaurus Rex (Rexy) inadvertently comes to their rescue (something that becomes a regular occurrence as the franchise goes on).

Not only does this epic battle conclude in the most iconic shot in the entire Jurassic Park series — the rex roaring as the banner that reads “When Dinosaurs Ruled the Earth” drifts down toward the museum floor — it’s also insanely entertaining, particularly the shot in which Rexy lunges towards the camera to bite down on the final raptor, before launching it into a T-Rex skeleton!

And so we finally arrive at first place. Did you really think any other film in this series was going to beat Jurassic World? After all, there are many reasons why the dinosaur battle in this installment is the most memorable of all, whether it’s the number of dinosaurs involved, the high stakes, the way it’s executed, and, of course, that precious duration that makes all the difference.

After escaping the four raptors with their lives, Owen, Claire, and brothers Zach Mitchell (Nick Robinson) and Gray Mitchell (Ty Simpkins) find themselves on Main Street in Jurassic World, when they encounter the Indominus Rex. Luckily, Owen, who quickly regains his position as the raptors’ “alpha”, orders the pack to attack the large hybrid dinosaur.

A true prehistoric royal rumble ensues, as the Indominus seemingly defeats all the raptors. So Claire quickly releases the original Jurassic Park T-Rex, luring her into the fight with a flare. As they battle, the two titans obliterate Main Street, and soon, Blue returns to help Rexy. The fight concludes with the Mosasaurus literally crashing the party, before dragging the villainous dinosaur into the murky depths of the Isla Nublar lagoon.

How would you rank all the dinosaur battles in the Jurassic Park/Jurassic World franchise? Let us know in the comments down below!