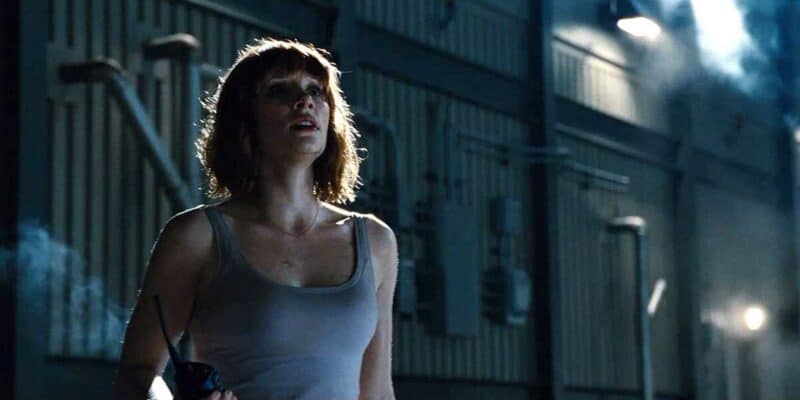 Originally scheduled for a 2021 release, Jurassic World: Dominion was delayed due to the pandemic. Sam Neill, who is reprising his role of Dr. Alan Grant in the film, previously talked about what it was like returning to the franchise after 20 years, having last appeared in Jurassic Park III (2001), and how shooting during the pandemic brought the cast together while they were locked down.

He also went on to praise Chris Pratt (Owen Grady) and Bryce Dallas Howard, describing them as “sweethearts”. Now, Howard, who, like Sam Neill, is making her third appearance in the Jurassic franchise, has talked about what it was like working with the Jurassic Park (1993) actor while they were locked down, as well as Jeff Goldblum, who is reprising his role as Dr. Ian Malcolm.

The 41-year-old actress talked about how she and the rest of the cast bonded really well during the shoot, and how Sam Neill and Jeff Goldblum kept everyone entertained and in good spirits. She also discussed what it was like working with Laura Dern, who is returning as Dr. Elle Sattler alongside Neill and Goldblum in Jurassic World: Dominion. In her interview, Howard said:

Bryce Dallas Howard’s Claire Dearing is a leading Jurassic World character, having appeared in both previous installments. Now, she’s set to return alongside Chris Pratt (Owen Grady), while also teaming up with the three legacy characters from the original Jurassic Park, all of whom will have equally major roles in the film, according to director Colin Trevorrow.

In the official Jurassic World: Dominion trailer, Claire Dearing is seen in a number of deadly situations involving genetically engineered dinosaurs — she is attacked by a Quetzalcoatlus while aboard a small plane, stalked by a Therizinosaur in a swampy forest, comes face to face with a Dilophosaur, and even encounters a Giganotosaur.

Jurassic World: Dominion picks up four years after the world-changing events of Jurassic World: Fallen Kingdom, to find dinosaurs thriving in the wild, in North America and beyond. Specific plot details are unknown, but we do know that Jurassic Park villain Lewis Dodgson will be returning, this time played by Campbell Scott and not Cameron Thor.

Dodgson, a ruthless geneticist who works for InGen’s rival company Biosyn, is the main villain in Michael Crichton’s novel “The Lost World” (1995), the successor to the bestselling “Jurassic Park” (1990). Exactly how much screen time he will get in Jurassic World: Dominion remains to be seen, but we’re sure Claire won’t just be coming face to face with villains of the dinosaur variety.

Recent months have seen the unveiling of the Jurassic World: Dominion prologue, the official trailer, a number of 2022 Winter Olympics TV spots which featured dinosaurs from the upcoming movie, and more recently, a featurette including the cast and crew, as well as an ESPN promo in which the NBA’s only Canadian team the Toronto Raptors encounter raptors from the movie!

With the movie just around the corner, it’s likely we’ll see more in the way of trailers and TV spots in the coming weeks. Colin Trevorrow has described the movie as the “culmination of the entire franchise“, while the tagline promises that it will be the “the epic conclusion of the Jurassic era”. Needless to say, Jurassic World: Dominion is shaping up to be the most epic movie in the series.

While it’s being dubbed as the final film in the series, producer Frank Marshall recently hinted at future movies. We’ll just have to wait and see what happens in Jurassic World: Dominion, and whether or not dinosaurs will end up ruling the earth by the time the credits roll.

Which character are you most excited to see return in Jurassic World: Dominion?