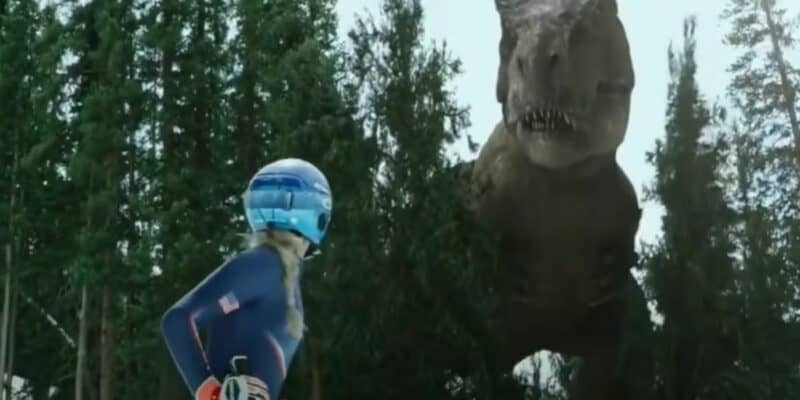 While we recently got to see the epic five-minute preview for Jurassic World: Dominion (2022) in which dinosaurs rule the earth, we’re yet to see anything in the way of an official trailer for Colin Trevorrow’s upcoming sequel. The movie will be the final entry in the Jurassic World trilogy, and the sixth installment in the Jurassic Park franchise.

However, this doesn’t mean that the dinosaurs from Jurassic World: Dominion aren’t able to show up in trailers for other things. After all, the latest movie will revolve around escaped dinosaurs now living in the wild on mainland North America, as seen at the end of Jurassic World: Fallen Kingdom (2018). In other words, they’re free to do as they please!

This might explain why two pretty well-known dinosaurs recently made a very random appearance in a trailer for something that isn’t in any way Jurassic World-related. But while it’s not an actual trailer for Jurassic World: Dominion, it’s still something fans will be sinking their teeth into as they wait for the real thing.

Universal Pictures, the studio behind the Jurassic World and Jurassic Park movies, shared the video via Twitter, in which a skier encounters ‘Rexy’ and ‘Blue’, the T-Rex and Velociraptor from the Jurassic World movies. The TV spot is for the 2022 Winter Olympics, although it’s fair to say we shouldn’t actually expect to see real skiers stalked by dinosaurs as they descend white slopes.

Check out the new trailer below (it will give you ‘chills’):

As this is nothing more than some very creative cross-promotion for both Jurassic World: Dominion and the Winter Olympics (or a ‘hybrid’ if you will), it’s very unlikely that this scene will feature in the upcoming sequel. Nevertheless, it’s likely to whet fans’ appetites, as the upcoming summer blockbuster, like many others, was originally delayed due to the global pandemic.

But while this is no way an official Jurassic World: Dominion trailer (though a teaser nonetheless), Colin Trevorrow hasn’t been shy about discussing details for the upcoming film. The director has also revealed images which have included Chris Pratt’s Owen Grady on a motorcycle outrunning a new breed of raptor, and Bryce Dallas Howard’s Claire Dearing hiding in a swamp.

When do you think the official trailer for Jurassic World: Dominion will drop?