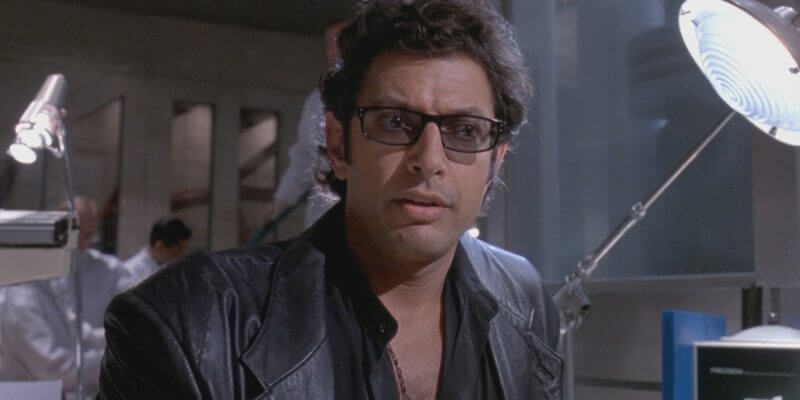 It’s been 28 years since Jurassic Park came crashing down, when disgruntled computer programmer Dennis Nedry (Wayne Knight) shut down the electrified fences so that he could steal embryos for a rival company, inadvertently allowing the t-rex and the raptors to escape!

While he didn’t fulfill his get-rich-quick scheme, if he’d have been a satisfied employee, Jurassic Park would have opened to the public as planned. Nevertheless, InGen’s biological preserve failed, and we had to wait 22 years before finally seeing the Park open in Jurassic World (2015).

But even if Jurassic Park did go on to open its enormous gates (on the other side of which there is no King Kong, let it be said), was it always headed for disaster? The short answer is yes. The more interesting answer? Here are seven signs Jurassic Park was doomed to fail from the start!

Jurassic Park’s opening scene wastes no time in getting down to business. When trying to move a velociraptor from a container into the ‘raptor pit’, things go horribly wrong for an InGen worker. Just as the container is positioned against the pit and its doors are lifted, the raptor rams the rear-end of the unit, creating an opening.

But instead of escaping, it drags a poor gatekeeper inside its container and forces game warden Robert Muldoon (the late Robert Peck) to watch. There’s no doubt that these incidents would have continued, and anyone familiar with Michael Crichton’s novel will know that there are many cases of dinosaurs attacking – and even killing – InGen employees.

This is likely the case in the film too, despite nothing beyond the raptor incident being mentioned (it’s not exactly information John Hammond would volunteer to his Guests!). Nevertheless, eventually, the InGen board would have shut the Park down, and lawsuits from families would have led to bankruptcy (which is what happens after the first film anyway).

6. There Was Unauthorized Breeding

“There is no unauthorized breeding in Jurassic Park,” Dr. Henry Wu (B. D. Wong) tells the Guests, explaining that InGen’s scientists have made all the dinosaurs female. But one of the first signs that InGen has no control is when we learn that dinosaurs are indeed breeding in the wild (we can assume that the company also cuts costs on surveillance then!).

This is something Dr. Alan Grant (Sam Neill) is the first to discover when he finds eggs in the jungle while leading the kids back to the Visitor Center. As the gaps in the dinosaurs’ gene code sequences were filled with that of African bullfrogs, the dinosaurs have quickly evolved to spontaneously change sex so that they can breed.

Had Jurassic Park have opened, this problem would have continued too. And who knows how long it would have been until InGen finally noticed! In the book, the company misses out on a lot of unauthorized breeding, and even learns that dinosaurs – compys and raptors – have been sneaking onto boats and making it to the mainland unnoticed!

5. Dinosaurs Were Getting Sick

While it’s something that isn’t fully explained in the film or even revisited in the sequels, some of the dinosaurs in Jurassic Park are sick. The triceratops’ crippling illness is attributed to the fact that it had been eating West Indian lilac – which is toxic to the dinosaurs. The sneezing brachiosaur, however, is never really explained.

It’s possible that the brachiosaur simply has a bit of dust up its enormous snout (it happens to the best of us), but that’s two sick dinosaurs in the film. We doubt the brachiosaur was eating the same vegetation as the trike (especially considering it gets its greenery from high up in those fig trees), but the novel The Lost World does expand on these diseases somewhat.

In the film, though, these sick dinosaurs are likely to further demonstrate the lack of control – and knowledge – on InGen’s part. Just like with the breeding, it takes a guest (in this case, Ellie Sattler) to discover something that InGen’s scientists and Park wardens should have figured out first. Perhaps Jurassic Park’s employees were always the problem!

4. Admission Would Have Been Extortionate

It’s ironic that John Hammond (the late Richard Attenborough) tells “blood-sucking lawyer” Donald Gennaro (Martin Ferrero) that Jurassic Park “won’t cater only for the super-rich” when he’s built it on a remote Costa Rican island. And while Gennaro’s “coupon day” joke may be tasteless, it’s the only way the average family would have ever been able to visit the Park!

If there’s one thing the dastardly villain Peter Ludlow (Arliss Howard) gets right in the 1997 sequel The Lost World: Jurassic Park, it’s when he says, “You don’t take people halfway around the world to see the Park – you bring the Park to them”, when referring of course to the far more modest and achievable Jurassic Park San Diego.

But due to the inevitably sky-high price of admission alone, Jurassic Park probably wouldn’t have lasted very long. With that said, there are plenty of rich people on the planet, and perhaps this would have kept the Park’s head above water for some time, but soon enough, John Hammond would have cursed the day he ever laughed off that coupon joke.

3. Industrial Espionage Would Have Continued

Do we really think that, even if Dennis Nedry hadn’t shut the power down across the entire Park, or taken BioSyn up on their offer in the first place, industrial espionage would have ended with him? If Jurassic Park had continued, then crooked geneticist Lewis Dodgson (Cameron Thor in Jurassic Park/Campbell Scott in Jurassic World: Dominion) would have too.

This is yet another element of the story that plays a much bigger role in the novel Jurassic Park, and even in the 1996 sequel The Lost World. BioSyn – one of many rival bioengineering companies around the planet – intends to ‘reverse engineer’ InGen’s viable embryos and clone their own dinosaurs, and not necessarily for the purpose of a theme Park!

With such a poor security system (evident by the fact that a computer programmer is able to just wander into the embryo’s storage facility), Jurassic Park would have fallen prey to one of its rivals sooner or later. And so eventually, competition – in whichever form it might have taken – would have probably put Jurassic Park out of business.

2. Scientists May Have Decided Not to Endorse the Park

We all assume that if Dennis Nedry didn’t succeed in shutting the power down and releasing the dinosaurs, that Alan Grant, Ellie Sattler (Laura Dern), and Ian Malcolm (Jeff Goldblum) would have given the already-troubled Jurassic Park the green light to go ahead with an opening to the public in a year. How naïve of us to think such a thing!

It’s reasonable to assume that Donald Gennaro would have wanted to make a fortune with that place, but it’s likely that his nemesis Ian Malcolm would have opposed the idea, especially as he’s so vocal about it all during the infamous dinner scene. As for Alan Grant and Ellie Sattler, it’s not so easy to tell, although even the first half of their tour is bad in its own right!

Ultimately, though, it may not have mattered too much whether they decided to endorse the Park or not, as John Hammond is merely seeking scientific observation in the film (and no doubt looking to impress). Perhaps it all rested on Gennaro’s shoulders in the end, so it’s probably a good thing he ends up getting eaten while sitting on a toilet.

In 2015, the Park finally opened to the world. Repackaged (and slapped on the same plastic lunchbox), Jurassic Park became Jurassic World, both on and off the screen. The old Park was ancient history, relegated to nothing more than Isla Nublar’s Restricted Area. In other words, Jurassic World had literally been built on the rubble of the old Park!

One word: employees. Jurassic World was as doomed as Jurassic Park, even it did manage to open and stay that way long enough for Guests to become bored with the idea of dinosaurs. So history will always repeat itself where cloning dinosaurs and putting them in theme parks is concerned. In the case of Jurassic World, though, it was less hybrid and more stupid.

It will be interesting to see what Nedry’s dastardly (and disastrous) scheme has ultimately led to in Jurassic World: Dominion, which releases in theaters on June 10, 2022. The film stars Bryce Dallas Howard, Chris Pratt, Sam Neill, Laura Dern, and Jeff Goldblum, while Lewis Dodgson will also be making a comeback, this time played by Campbell Scott.

Do you think Jurassic Park was doomed to fail?