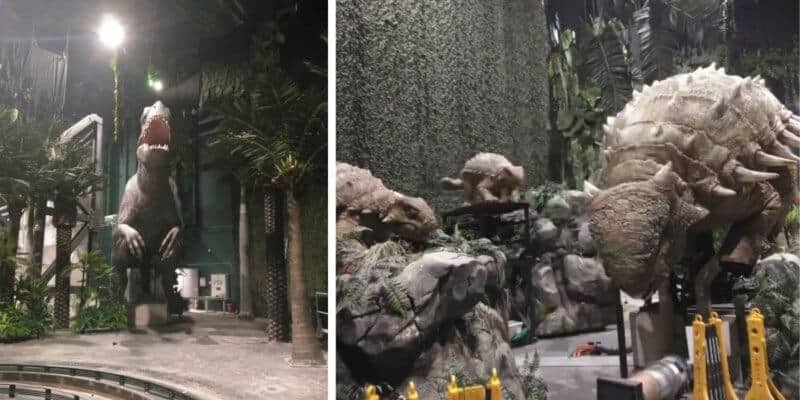 In the Universal theme parks, we are quickly starting to see the Jurassic World IP come to life in a big way.

Jurassic Park has always been a relevant storyline at Universal; however, now that the new Jurassic World films are quickly becoming a cult-classic, Guests are excited to live in the new storylines as well while seeing some of their favorite characters such as Owen Grady (Chris Pratt) come to life.

At Universal Orlando Resort, we have started to see an amalgamation of the Jurassic Park IP and Jurassic World IP. Guests can still ride the classic Jurassic Park River Adventure, as well as meet one of the raptors from the new films, and ride Jurassic World VelociCoaster, where they will get to experience the InGen theme park that was always meant to be from the films as they ride through a raptor paddock on a roller coaster.

Universal Hollywood reopened with a newly refurbished Jurassic World – The Ride, which improved technology from the old attraction, added in dinosaurs, as well as the Jurassic World Gyrosphere Rc Vehicle, alongside adding Owen Grady and Claire Dearing to the attraction.

Seeing how well both attractions have to be received by Guests, it will be no surprise that Universal Beijing’s Jurassic World dark ride will emerge as a fan-favorite for Guests. Recently, Universal Core (@Universal_Core) shared some photos of the animatronics that we will get to see at the attraction, and they are larger than life!

Inside the Jurassic world dar ride at #UniversalStudiosBeijing

Previously, we shared an article on how the T-Rex animatronic was progressing, and as we can see from this photo, the once half-constructed dinosaur now looks to be complete and fully painted. It is interesting to see the state of the dark ride with the lights on, as it seems to be a lot more complete than previously seen, but without effects functioning, it is impossible to assume how this ride will look once the park opens.

At the moment, Universal Beijing has pushed its opening date back due to the ongoing COVID-19 virus, and there is no official opening aside from 2021. Many Universal fans are hoping for a summer opening of the new theme park, but that will be something we will need to wait to discover.

Do you think that this Jurassic World dark ride will be a popular attraction at Universal Beijing? Let us know in the comments below!