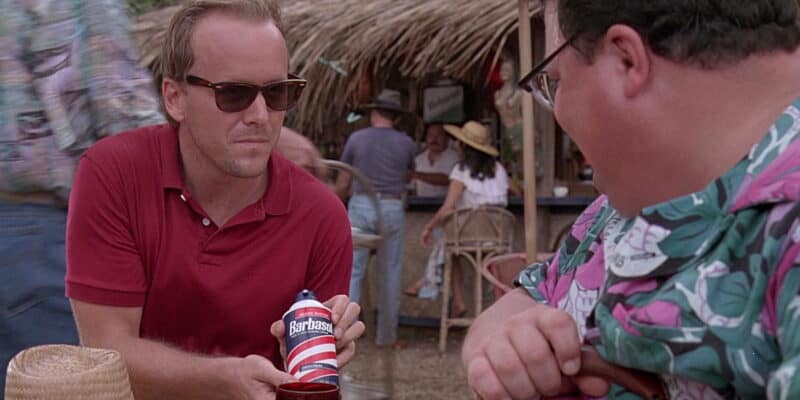 Jurassic Park (1993) fans know the ins and outs of the movie that started it all — from the infamous velociraptor JELL-O scene in the kitchen to the introduction of the franchise’s iconic Tyrannous Rex, Jurassic Park‘s key scenes have stood the test of time.

There is, however, one scene that has long buffaloed fans through all five movies in the Jurassic Park and Jurassic World franchises, from the original film to The Lost World (1997) to Fallen Kingdom (2018) starring Chris Pratt (Owen Grady) and Bryce Dallas Howard (Claire Dearing).

If you’ll venture back to 28 years ago in a movie theater seat, you’ll probably recall the first time you met Jurassic Park’s lead programmer Dennis Nedry (Wayne Knight) — a self-absorbed oaf who essentially didn’t give a triceratops tail about anyone but himself.

In the first Jurassic Park film, Nedry makes a deal with Biosyn’s lead researcher Lewis Dodgson (Cameron Thor) that ultimately leads him to attempt to smuggle dinosaur embryos off of Isla Nublar in a now-famous Barbasol can. “Attempt” is the operative word here.

As one recent article summarizes:

He collects the embryos from cold storage after turning off the island’s security systems. However, on the way to meet with his contact, he gets in a car accident. Nedry tries to extricate his car but he is attacked by a Dilophosaur, with the embryo cans being washed away and ultimately buried in mud. This is the last time that the Jurassic Park lore witnessed the Barbasol can.

The upcoming final film in the Jurassic story — Jurassic World: Dominion (2022) — though, could finally solve the Barbasol mystery.

This sixth installment in the interconnected franchises will feature Campbell Scott as Lewis Dodgson, meaning that this is our last best chance to get a resolution to the long-debated Barbasol mystery.

You can watch Dennis Nedry lose his battle with the Dilophosaur below:

Experience one of the biggest films in motion picture history with director Steven Spielberg’s ultimate thrill ride, Jurassic Park. Featuring Academy Award® winning visual effects and groundbreaking filmmaking that has been hailed as “a triumph of special effects artistry” (Roger Ebert, Chicago Sun-Times), this epic film is sheer movie-making magic that was 65 million years in the making. Jurassic Park takes you to an amazing theme park on a remote island where dinosaurs once again roam the earth and five people must battle to survive among the prehistoric predators. Starring Sam Neill [Alan Grant], Laura Dern [Ellie Sattler], Jeff Goldblum [Ian Malcolm] and Richard Attenborough [John Hammond], discover the breathtaking adventure you will want to experience again and again.

One description of Dominion reads:

The sequel [to Fallen Kingdom] was first confirmed by Fallen Kingdom director, Juan Antonio Bayona. Filming began in Canada in February 2020 and the film is set to be released internationally on June 10, 2022. It was previously set for release on June 11, 2021, but it was pushed back a year due to the COVID-19 pandemic.

While Dominion will round out a trilogy of films that began in 2015 with Jurassic World, an interview with Frank Marshall revealed that Dominion will be the beginning of a “new era”, hinting at further sequels as a result of Fallen Kingdom’s ending.

An official synopsis has not yet been released. The movie is set to hit theaters on June 10, 2022.

What do you think — will we finally get a resolution to the Barbasol can almost three decades later?