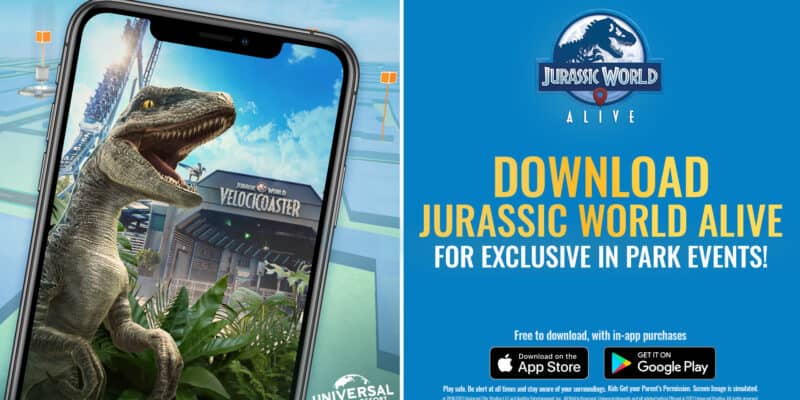 All the way back in July 2016, Pokémon Go was released for iOS and Android users and was an immediate hit. The game got people out and active in their area in the hopes of catching all those elusive Pokémon. Two years later, Jurassic World: Alive was released and got people out and catching dinosaurs in order to save them from becoming extinct (again).

In the past, Jurassic World: Alive teamed up with Universal Studios Hollywood to give Guests at the Southern California theme park the chance to catch dinosaurs that were exclusively in the Park. And now, it looks like the same thing might be happening at the Universal Orlando Resort.

Hold onto your butts! We’re in a video game!

Hold onto your butts! We're in a video game! 🤩 pic.twitter.com/1N3zTFjLMv

While there are few details about just how Jurassic World: Alive will be incorporated into the Parks, it seems reasonable that the game will copy the success of teaming up with Universal Studios Hollywood and bring exclusive dinos to Universal Studios Orlando and Islands of Adventure. Just based on the photo shared by Universal Orlando, it looks like Jurassic World: Velocicoaster will be getting in on the action.

If you are unfamiliar with Jurassic World: Alive, here is some more information on the popular game from Jurassic Park Wiki.

They’re ALIVE in our world!

Dinosaurs have returned to rule the Earth. They have fled Jurassic World on the unstable island of Isla Nublar… and they’re roaming free in your cities and neighborhoods.

As a brand-new member of the Dinosaur Protection Group (DPG), your mission is to save dinosaurs from a second extinction. Explore your surrounding area to find your favorite dinosaurs – including new breeds that are more awe-inspiring and terrifying than ever before. Activate augmented reality (AR) to interact with these unbelievable creatures in the real world.

Track these magnificent animals with a drone and collect DNA samples needed to level up and create hybrids in your Lab. Then, assemble the perfect dinosaur strike team and take on dangerous threats in real-time PVP arena battles!

Universal has not announced when the game will come to the theme parks, but since the team-up has been announced, a start date can’t be too far behind!

Are you excited to see Jurassic World: Alive coming to the Universal Orlando Resort? Let us know in the comments!