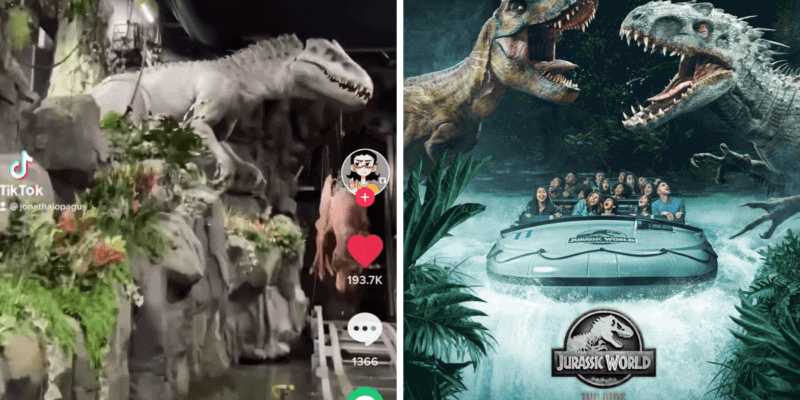 But have you ever wondered how these oversized animatronics look like with the lights on? Well, thanks to a quick video on TikTok where the lights came on during the ride with Guests on. You can see the video below that was posted by user @jonathalopagus with a hilarious music choice:

♬ as the world caves in by matt maltese – anaya

If you have not had a chance to ride Jurassic World – The Ride yet, here is how Universal describes the attraction:

How awesome would it be for Universal to hold a special event that allows fans to ride their favorite attractions with the lights on? We hope that can happen in the future!

The T-Rex looks a bit sad when it is not in motion, but the Indominus Rex looks amazing. This is, of course, not the only Jurassic World attraction as Universal Orlando Resort opened the Jurassic World VelociCoaster at Island’s of Adventure earlier this year. The VelociCoaster features the Velociraptors from the film but no Idominus had yet appeared at Universal theme parks in Orlando.

If you want to meet the Velociraptors from the films you can enjoy the Raptor Encounter at Islands of Adventure or at Universal Studios Hollywood.

Universal’s newest theme park in Beijing will be home to a massive indoor Jurassic World dark ride. Which will feature plenty more dinosaur animatronics for Jurassic fans to enjoy. You can read more about that attraction here.

The Jurassic World franchise continues to be popular with fans and as such will likely continue to be integrated into the Universal theme parks. With the upcoming Jurassic World Dominion movie set to debut June 10, 2022.

What did you think of the animatronics with the lights on? Let us know in the comments!