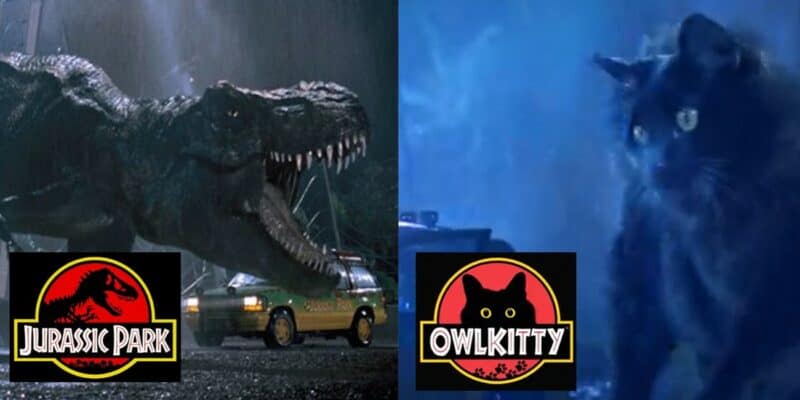 It’s late at night, you’re scrolling social media and you come across a video that you just have to share. Well, this one is that for us! We’re huge fans of the Jurassic Park franchise. With six Jurassic films and one on the way in 2022 (Jurassic World: Dominion), it can be difficult to keep up with all action. Our true love for the franchise however will always fall back to the original 1993 film, Jurassic Park. Apparently, we aren’t the only ones as this video creator put a hilarious spin on it… with a CAT!

The most memorable scene for us in Jurassic Park was when the tyrannosaurus makes a terrifying appearance, threatening the lives of the visitors of the dinosaur wildlife Park who are hiding in their vehicles. Whether you watched Jurassic Park first in theaters or on your television screen at home, it was an extremely stressful yet well-done scene that had us on the edge of our seats.

And now, the Jurassic Park scene has been put through a new twist and we can’t stop laughing. Here enters “Purrassic Park”. @Owl_Kitty took to Twitter to share the video which has now gone viral with 7 million views tweeting, “It’s feeding time! Welcome to Purrassic Park”. Check out the viral video in the tweet below:

It doesn’t matter if you love or hate cats, this giant cat clip is hilariously done. We especially love it when the little girl opens the can of cat food! Well done Owl Kitty. It’s no wonder “Purrassic Park” has gone viral on social media with 7 million views and counting.

We want another one! What creature would you like to see replace T-REX next?