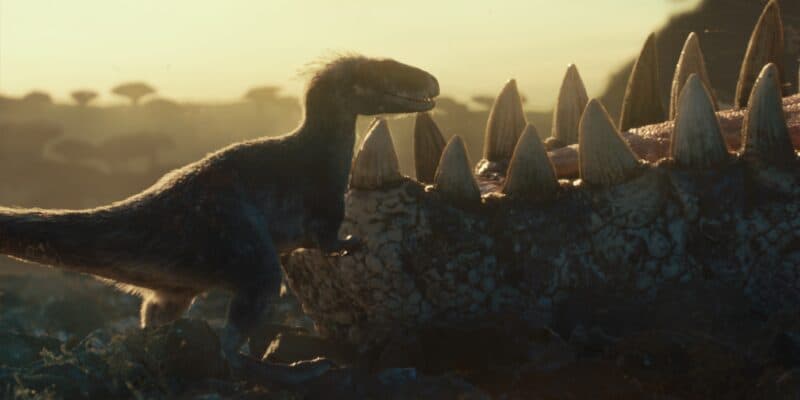 It used to be impossible to imagine that the Jurassic Park series, which started out on a remote island where a handful of dinosaurs escape their enclosures, would even think about having dinosaurs pop up all over the planet in future movies. But now, after seeing them released onto the mainland at the end of Jurassic World: Fallen Kingdom (2018), anything is possible!

Dinosaurs causing problems on mainland North America will be the main focus in the upcoming sequel Jurassic World: Dominion, but why are there also dinosaurs in other parts of the world when only a dozen escaped?! Other confirmed locations include Malta, and a recent image teases Owen Grady (Chris Pratt) being chased by an ‘Atrociraptor’ on the European island.

So now that we know that the words ‘Jurassic World’ no longer refer to a theme park, is it possible dinosaurs will end up ruling the earth in Jurassic World: Dominion? Could the new movie be paving the way for even more sequels? Here are all the signs it could happen…

Dinosaurs Are “Everywhere” in Dominion

At the end of Jurassic World: Fallen Kingdom, several dinosaurs are released from Lockwood Manor into the Sierra Nevada Forest. And in the Jurassic World: Dominion prologue, we jump forward four years and see Rexy rampaging through an outdoor cinema in the same area.

But Jurassic World: Dominion director Colin Trevorrow recently confirmed that dinosaurs will be “everywhere” in the new movie, not just America. While it’s very unlikely dinosaurs will be able to dominate the planet, there must be a reason why mankind is allowing them to flourish!

In Jurassic World: Fallen Kingdom, we see many moustache-twirling buyers purchase their own dinosaurs, so have other companies been ‘reverse-engineering’ these species? It is, after all, something Lewis Dodgson planned to do with the stolen embryos in the original film.

In fact, Dodgson will be returning in Jurassic World: Dominion (this time played by Campbell Scott), so perhaps other companies have indeed been creating their own dinosaurs. And maybe the Dinosaur Protection Group is the reason why humans haven’t been allowed to interfere.

Recently, a number of Jurassic World: Dominion images were shared, including Bryce Dallas Howard hiding in a swamp. The most recent one, however, which is a Seasons Greetings-themed image from Colin Trevorrow, shows Blue the raptor, next to what appears to be her offspring!

While Blue is the only raptor that survived Isla Nublar, the dinosaurs are presumably still able to change their sex, as explained in the original film. And as Jurassic World: Dominion is set four years later, it’s reasonable to expect that more raptors have been created around the world.

But the real clue may lie in Jurassic Park III. During the seminar scene, Alan Grant (Sam Neill) explains, “Were it not for the cataclysmic events that overtook them, it is entirely possible that raptors, rather than humans, would have become the dominant species on this planet.”

We know that raptors are highly intelligent, but in Jurassic Park III (2001), this is taken to another level. While the dream in which a raptor speaks is one of many hated scenes in the series, the film reinforces the idea that these predators certainly have the potential to become dominant.

The Meaning Behind “Dominion”

When it comes to titles, Jurassic Park movies don’t mince their words. The Lost World: Jurassic Park unveils a second InGen island which has been long abandoned by its scientists, while Jurassic World: Fallen Kingdom sees the destruction of Isla Nublar and its ecosystem.

And now, we have Jurassic World: Dominion, a title that certainly feels like a logical next step to Jurassic World: Fallen Kingdom, especially when we consider what happens at the end of that film. But what does the new title actually mean?

The word ‘dominion’ is defined as “man’s attempt to establish control over nature.” This is a theme that has been consistent throughout the entire Jurassic Park series, so it’s no surprise to see that it will also be weaved into Jurassic World: Dominion.

However, the title could have another meaning altogether. We know that the new movie will focus on dinosaurs thriving in the wild, in America and other parts of the world, while mankind attempts to control them, but does the title refer to the possibility of failure..?

Rise of the Planet of the Apes

There are many similarities between Jurassic World: Fallen Kingdom and Rise of the Planet of the Apes (2011), the first film in the ground-breaking Apes reboot trilogy. The most obvious is that they both revolve around intelligent animals being released into the wild on mainland America.

And then there’s the relationship between Owen and Blue, which is a mirror image of Rise’s Will Rodman (James Franco) and Caesar (Andy Serkis). In that movie, Will raises highly intelligent primate Caesar from birth and ultimately sets him free when things go awry. Sound familiar?!

We’re not suggesting that the 2018 film is a rip-off, but it does borrow a number of plot elements. And in Dawn of the Planet of the Apes (2014), man and ape must learn to coexist (although the lesson is short-lived), which is something Jurassic World: Dominion will explore in its own way.

In a mid-credits scene in Rise of the Planet of the Apes, a pilot infected with ‘Simian Flu’ boards a plane, and by the time we reach the sequel, most of mankind has been wiped out. While the Jurassic Park novels do include a virus, life will probably find another way in the new movie.

Do you think dinosaurs will rule the earth in Jurassic World: Dominion?