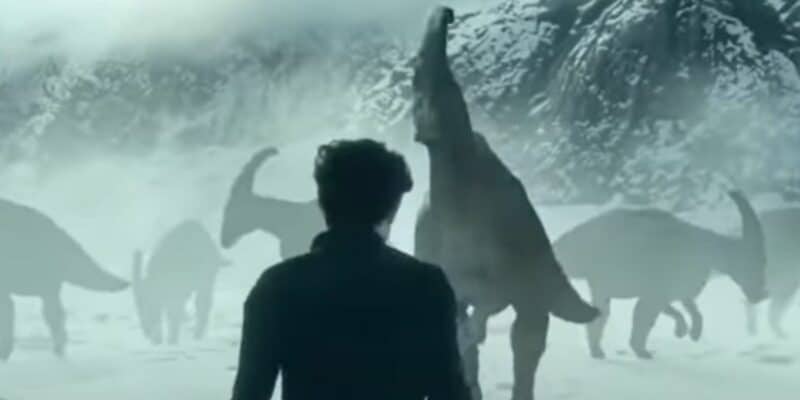 We’re yet to receive the official trailer for the upcoming Jurassic World: Dominion (2022), which will be the sixth installment in the popular Jurassic Park franchise, but that hasn’t stopped the ball from rolling on the marketing. In this case, however, you could call it a ‘snowball’, because a second ‘teaser’ set in a snowy environment has been released, following on from the first one we had just a few days ago.

Jurassic World: Dominion will focus on this issue, as people struggle to adjust with dinosaurs living on mainland North America. But according to director Colin Trevorrow, “dinosaurs are everywhere” in the new film. In fact, he recently shared an image from the movie which shows Owen Grady (Chris Pratt) on a motorcycle in Malta, being chased by an Atrociraptor.

So dinosaurs are slowly claiming the wild once again, and this time, the second teaser for Jurassic World: Dominion (or third teaser if you include the official preview) finds an unsuspecting Olympic athlete facing dinosaurs in a snowy wilderness. The ice skater is showcasing his impressive skills on a frozen lake when he’s suddenly approached by a herd of Parasaurolophus!

Check out the official 2022 Winter Olympics TV spot below:

In the first Olympics TV spot, a skier is stalked by Blue the Raptor and Rexy the T-Rex as she descends white slopes. So it’s fair to say that the ice skater in the new teaser is a lot luckier! But as well as the incredible special effects, one of the most notable features in these teasers is the epic score, which is of course a rendition of the theme tune from the original Jurassic Park (1993).

As the title suggests, Jurassic World: Dominion will revolve around mankind’s struggle to control nature, which is a running theme throughout all the Jurassic Park movies (with perhaps the exception of 2001’s Jurassic Park III, which is a pretty run-of-the-mill sequel). And just like the two theme parks, we’ve no doubt whatsoever that this attempt at control is doomed to fail.

The movie will also star Campbell Scott, who will be playing Jurassic Park villain Lewis Dodgson, who hasn’t been seen in the franchise since the original film (in which he was played by Cameron Thor). Dodgson is also a villain in late author Michael Crichton’s bestseller “Jurassic Park” (1990), though there are many major differences between the book and film.

Dodgson also appears in the “The Lost World” (1995), which was also adapted into a major blockbuster, The Lost World: Jurassic Park (1997). Like the first film, the sequel has notable differences to its novel counterpart, with the main one being the San Diego incident. It’s likely that Dodgson will once again be trying to genetically engineer his own dinosaurs in Jurassic World: Dominion.

As well as a number of promotional images, which have included Chris Pratt and Bryce Dallas Howard encountering dinosaurs, the special five-minute preview has also been released, but there’s still no sign of an official trailer. Last year, however, director Colin Trevorrow promised that it will soon be “trailers galore”, so we’ll be keeping our eyes open for cups of rippling water.

When do you think the official trailer for Jurassic World: Dominion will drop?