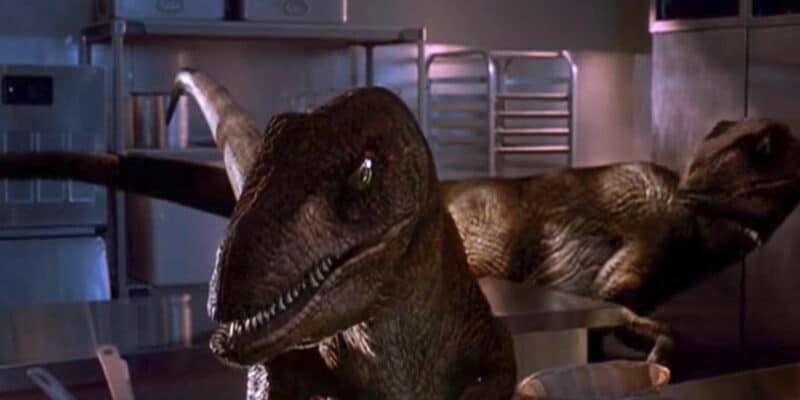 There are many ingredients that go into making a Jurassic Park movie what it is. And while some of those ingredients have been lost over the years (a sequence that involves a vehicle being assaulted by a large dinosaur being one of them, which pretty much ended after the third movie), one that has survived is the need for each entry to have a prehistoric antagonist.

Don’t move, run as fast as you can, or just hold onto your butts — either way, you’ve been warned! Here are all the main dinosaur villains in the Jurassic Park movies.

The Giganotosaurus is the villain of the five-minute Jurassic World: Dominion prologue, which was released alongside Fast & Furious 9 (2021) in IMAX theaters last summer. The Cretaceous predator, which was bigger than T-Rex, looks terrifying in the epic preview (although, in reality, being separated by millions of years, the two never would have crossed paths).

But what’s even more terrifying is that it lays waste to a t-rex in just moments! However, as the “Giga” has had very little screen time so far, unfortunately, it must land our bottom spot. Whether or not the dinosaur will be used in the modern day-setting of the upcoming sequel remains to be seen, but here’s to hoping we see a rematch between the Giga and Rexy!

Second from bottom is Allosaurus, as seen in the short film, Battle at Big Rock (2019), which was directed by Colin Trevorrow. The eight-minute snapshot into life on mainland North America one year after dinosaurs escaped from Lockwood Manor, as seen in Jurassic World: Fallen Kingdom, features the Late Jurassic predator as the main antagonist.

After following a family of Nasutoceratops into a campsite, an allosaur turns its attention to a family inside an RV. It’s thrilling to see a predator take on a vehicle, as it echoes early films in the franchise like The Lost World: Jurassic Park (1997). And the part in which the dinosaur is squeezing its jaws through the trailer and towards a trapped toddler is the stuff of nightmares!

The Indoraptor gets a pretty hard time from many fans. There’s no denying that the hybrid-dinosaur is criminally underused in the 2018 sequel, Jurassic World: Fallen Kingdom, but there’s also no denying that it boasts one of the sleekest and scariest dinosaur designs in the entire series so far. With that said, the creature as a whole makes very little sense.

In the film, it’s said that the ‘weaponized’ Indoraptor can follow a guided laser to attack, but if someone already has their sights on a target, then isn’t the dinosaur redundant? Well, the Indoraptor is still terrifying, even if it does smile (one of many scenes that fans hate throughout the series) and doesn’t actually try to kill Maisie Lockwood (Isabella Sermon)!

Mosasaurus is, in many ways, the true mascot of Jurassic World, and even has the money-shot of the entire movie, in a scene that cleverly mocks Steven Spielberg’s classic horror film, Jaws (1975). The thought of such a huge monster gliding beneath the murky surface of the water is a terrifying one, and the Cretaceous predator is definitely among the scariest in the series.

In just two movies — Jurassic World (2015) and Jurassic World: Fallen Kingdom — we’ve seen the mosasaur bite a Great White Shark in half, swallow a pterosaur whole, kill the Indominus Rex, and even make attempts to bring down a helicopter. Now, the mosasaur is free to explore the deep blue sea, so who knows where she will emerge in Jurassic World: Dominion!

Related: 5 Major Differences Between ‘Jurassic Park’ and the Novel

Many fans criticize Jurassic World for its use of a hybrid-dinosaur, which is the first in the series, but definitely not the last. However, director Colin Trevorrow pointed out, around the time of the film’s release, that the dinosaur was the only way he could justify making Jurassic World in the first place, seeing as it was an opportunity to bring yet another theme park to its knees.

And fortunately, we don’t get a dinosaur that is literally a mish-mash of many things. Indominus might be made up of T-Rex, Velociraptor, and some modern-day reptiles, but you wouldn’t know to look at it. And what makes this dinosaur awesome is how it has inherited attributes from all its genetic donors, such as the ability to camouflage and evade infrared detection.

There are a bunch of things in Jurassic Park III that make very little sense, but luckily, Pteranadon isn’t one of them. In fact, one of the best sequences in the film is when Alan Grant (Sam Neill), Amanda Kirby (Téa Leoni), Paul Kirby (William H Macy), Eric Kirby (Trevor Morgan), and Billy Brennan (Alessandro Nivola) stumble into a giant bird aviary.

While we did get to see one of the prehistoric winged reptiles just before the credits roll in The Lost World: Jurassic Park, the third entry in the series marks their official introduction. And they look pretty great! Not only that, but they’re a force to be reckoned with, because no matter where the characters hide, whether it’s in a caged tunnel or in the water, there’s no escaping them!

Jurassic Park III is one of the most disliked sequels in the series, but that doesn’t mean it doesn’t get a fair few things right in its short runtime. If anything, it’s wildly entertaining and barely takes a moment to breathe. But where the dinosaurs are concerned, besides the aviary sequence, its best asset is easily Spinosaurus, a Late Cretaceous super-predator that rivals T-Rex in size.

In fact, this comparison is put on show as the two fight it out! It’s something that, even to this day, is a bone of contention for many fans, but it’s a well-shot scene, even if it is short-lived (no pun intended). The spinosaur’s design is also stunning, and in hindsight, it’s refreshing to see that the threequel changed things up a little where the main dinosaur villain was concerned.

Alongside T-Rex, Velociraptor is the most recurring dinosaur in the Jurassic Park series, but their portrayals vary from one film to the next. In Jurassic Park, they’re highly-intelligent hunters that are impossible to survive once they get their retractable claws on you. The Lost World: Jurassic Park’s versions are scavengers, while Jurassic Park III’s are evolved communicators.

In the Jurassic World movies, however, they’re more anthropomorphic (but dangerous nonetheless), with Blue essentially being the pet of Owen Grady (Chris Pratt). As such, third place is reserved for the raptors in the 1993 film. If any scene demonstrates the sheer brutality of these pack hunters, it’s the one in which game warden Robert Muldoon (Bob Peck) is killed.

Tyrannosaurus Rex might be the king of the dinosaurs (at least during its segment of the Cretaceous Period), but as far as our list is concerned, this dinosaur only come second place! Nevertheless, it’s still a proud crown to wear, and T-Rex has played the main dinosaur villain exceptionally well in almost every appearance throughout the Jurassic Park movies.

In the original film, she’s a truly terrifying animal, in The Lost World: Jurassic Park, we get two of them (although fans hate the San Diego scene), and seeing the original t-rex (Rexy) make a triumphant return in Jurassic World is awesome. According to director Colin Trevorrow, and as teased in the Jurassic World: Dominion preview, we can expect a truly epic character arc for Rexy in the upcoming sequel.

While as beautiful as a tropical flower, with its impressive neck frills, Dilophosaurus remains one of Jurassic Park’s deadliest additions. Its hooting gives the impression of a bird of prey, but its venomous spit reminds you that this is no owl. In the original film, Dennis Nedry (Wayne Knight) meets a truly sticky end (pun intended) when a dilophosaur climbs into his jeep!

Dilophosaurus has also only appeared in Jurassic Park, and is the only dinosaur in the series that’s entirely animatronic. Seeing as Jurassic World: Dominion is bringing back several original characters, as well as Rexy and Blue, both of which recently appeared in a 2022 Winter Olympics trailer, (there have been three trailers so far), let’s hope the sequel also brings back this terrifying Jurassic predator.

We’ll just have to wait and see what the main dinosaur villain will be in Jurassic World: Dominion, but so far, many species new to the series have been confirmed, including Atrociraptor, which was revealed in an image in which Owen Grady is outrunning one on his motorcycle in Malta. Who knows — perhaps dinosaurs will end up ruling the world in the new film. Either way, it’s set to be the most epic entry in the Jurassic Park series.

Which are your favorite dinosaur villains in the Jurassic Park movies?