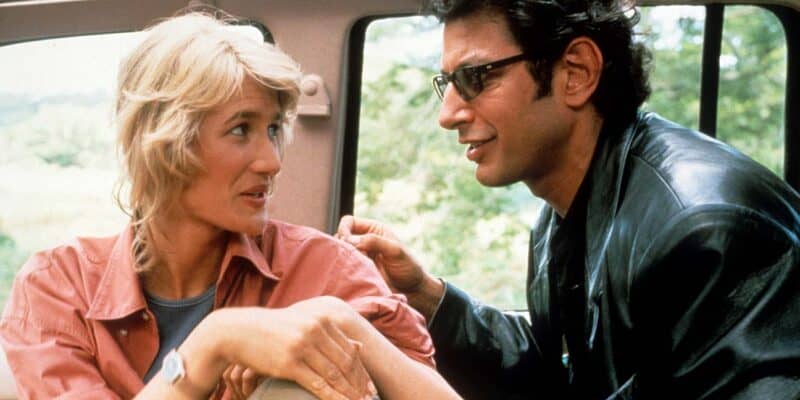 While the film hasn’t been met with the most favorable reception, we happen to think it’s great fun, largely because seeing the original Jurassic Park trio — Ellie, Alan, and Malcolm — back on the screen and teaming up with Jurassic World characters makes for some great moments.

Warning — there are some major spoilers ahead for Jurassic World: Dominion.

The sixth entry in the Jurassic Park series finds dinosaurs roaming across North America and beyond, while greedy bioengineering company Biosyn tries to monopolize the global food  market by unleashing a horde of genetically-engineered Cretaceous locusts to destroy non-Biosyn crops.

While Ellie, Alan, and Malcolm investigate the company from the inside at Biosyn Valley in Italy’s Dolomites mountains, Claire Dearing (Bryce Dallas Howard) and Owen Grady (Chris Pratt) race to the facility to rescue Maisie Lockwood (Isabella Sermon) and Blue the raptor’s offspring “Beta”.

Eventually, both Jurassic Park and Jurassic World characters team up for the first time, in none other than a jungle environment — where else, of course?! But as flaming locusts burn the jungle all around them, our Jurassic heroes must fend off Cretaceous apex predator giganotosaurus.

This action-packed, nail-biting sequence produces many great moments, whether it’s hearing Alan and Owen say “Don’t move” at the same time, or watching the characters team up to stab, shoot, and poke the super predator from the edge of a communications tower.

However, there’s one moment that may over time become as iconic as many other scenes throughout the entire Jurassic Park franchise. And it involves the one and only Ian Malcolm, who’s attempt at distracting the dinosaur features two major callbacks to the original 1993 film.

While Ellie, Alan, Maisie, Claire, Owen, and Kayla Watts (DeWanda Wise) make for the communications tower, Malcolm bravely decides to stay behind on the jungle floor to distract the giganotosaur. And how does he decide to do this? Using a flare, by any chance?

No, this time, Malcolm is a lot smarter — instead, he decides to double-up by using a flaming locust on the end of a branch, which serves as both a distraction and a weapon at the same time. How so? Well, after waving it a few times, Malcolm launches the fiery spear into the open jaws of the dinosaur!

While it may not seem obvious on initial viewing, this is a major callback to the scene in the original Jurassic Park (1993) in which Malcolm foolishly abandons the jungle explorer during the t-rex breakout, to distract the large animal with a flare, something Grant had already achieved.

As we know, this goes horribly wrong, as the rex instead turns its attention to Malcolm and chases him at full speed down the road, smashing him through a free-standing toilet and causing him life-threatening injuries. Another consequence of his recklessness is that the rex then eats lawyer Donald Gennaro (Martin Ferrero).

But Jurassic World: Dominion sees Malcolm righting that wrong, and what better way to redeem oneself than to launch a flaming spear into the jaws of a dinosaur bigger than a t-rex! But this isn’t the only callback to the original, as it’s followed by another crowd-pleasing moment.

Once all our heroes are safe in the communications tower, having sent the giganotosaur back into the jungle, ex-air force pilot Kayla gives Malcolm a look which tells him that his shirt is perhaps more unbuttoned than is considered appropriate, so he hilariously fixes his wardrobe malfunction!

Related: ‘Jurassic World: Dominion’ on Track to Be Bigger Than Any Marvel Movie of 2022

This, as you’ll undoubtedly know, is a reference to the scene in Jurassic Park in which an injured Malcolm is resting, propped up on his elbow with his shirt entirely unbuttoned! This shot has been immortalized over the years in the form of memes, GIFs, and all sorts of merchandise.

So, while the critics are tearing Jurassic World: Dominion apart like a carnotaur might do with an unsuspecting civilian on a scooter in the seemingly safe streets of Malta (just an example), let it be said that the film certainly knows how to please an entire audience!

Ian Malcolm has long been a fan-favorite Jurassic Park character. If he isn’t warning his fellow characters about the grave dangers of genetic engineering, he’s so preoccupied with saving his friends, that he doesn’t necessarily stop to think if he should put his life in danger!

Did you enjoy watching Ian Malcolm launch a flaming spear into the giganotosaur’s mouth in Jurassic World: Dominion?! Let us know in the comments down below!