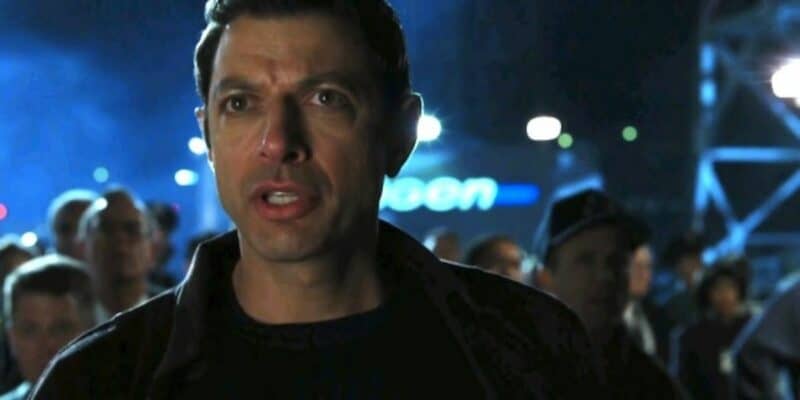 Jurassic World: Dominion (2022) is currently taking the box office by storm, both in the US and around the world, a little like how the dinosaur populations in the movie itself have taken over the North American wilderness while having also breached borders and crossed continents.

The sixth installment in the hugely successful Jurassic Park franchise is on track to become one of the biggest blockbusters of 2022, even if it is being eaten alive by critics (are they the real dinosaurs?!). And while many criticisms are warranted, the film is still a huge blast.

For diehard fans, to no surprise, there are a number of Easter eggs throughout the film waiting to be unearthed by pterosaur-eyed viewers. You will of course probably need to watch the movie a number of times to spot all of them, and you may have even missed some obvious ones!

In fact, we’re not entirely sure you could call the scene we’ve picked out an Easter egg per se, because it’s actually more of a cameo. Jurassic World: Dominion features several characters from previous movies, even beyond its main line up of Jurassic heroes.

Lowery and Vivian, however, two former Jurassic World employees like Barry, appear only via profile images on a tablet, so they’re very blink-and-you’ll-miss-them Easter eggs. But there’s another double-cameo in the movie that’s just as easy to miss, which comes much later on.

Jurassic World: Dominion revolves around the  premise in which dinosaurs have flourished in the wilderness, no longer contained by the boundaries of an island such as Isla Nublar or Isla Sorna/Site B, while the plot itself centers on the broader dangers of genetic engineering.

Warning — there are major spoilers ahead for Jurassic World: Dominion.

Following a series of unfortunate events, our heroes, Owen, Claire, Maisie, Ellie, Grant, Malcolm, and newcomer Kayla Watts (DeWanda Wise), wind up at a Biosyn facility in the Italian Dolomites mountains, which isn’t unlike Isla Sorna/Site B — dinosaurs are essentially allowed to roam free.

There, they are pursued by dinosaurs such as pyroraptor, therizinosaurus, quetzalcoatlus, dimetrodon, dilophosaurus, and giganotosaurus, as they attempt to stop Biosyn head Lewis Dodgson (Campbell Scott) from unleashing prehistoric locusts on the world.

To no surprise whatsoever, Rexy quickly becomes the anti-hero once again, just like she has been portrayed in every film she’s appeared in. On this occasion, she lays waste to the giganotosaur with the help of the therizinosaur. As such, this makes it obvious that this t-rex is indeed Rexy.

There’s no reference to the fact that this is the original Jurassic Park t-rex, though, other than the fact that she appears in the Jurassic World: Dominion prologue. It seems that, between the prologue and this film, Biosyn have captured her in the Sierra Nevada Forest and brought her to the Dolomites.

Lewis Dodgson makes no mystery about the fact that Biosyn has been salvaging wild dinosaurs when revealing how he has acquired so many. He also goes on to say that Biosyn’s “first generation dinosaurs” come from Isla Sorna/Site B, the island from The Lost World: Jurassic Park (1997) and Jurassic Park III (2001), which is a nice little Easter egg and nod to the two sequels.

And it’s this that allows for a pretty epic Lost World Easter egg during one of Jurassic World: Dominion‘s closing shots, although it’s actually more of a double-cameo. We see a battle-worn Rexy (when isn’t she battle-worn?) approach two other adult tyrannosaurs in the Biosyn jungle, which following the events at Biosyn, has now become a sanctuary.

From what Lewis Dodgson reveals earlier in the film, these two rexes require no introduction — they’re the dinosaur villains from The Lost World: Jurassic Park, which stalk both the heroes and villains throughout the jungle of Isla Sorna/Site B and in San Diego (a widely hated sequence)!

You might also remember that these two t-rexes had an infant in that film, but where is the offspring in Jurassic World: Dominion? Well, seeing as that rex doesn’t make an appearance in the sixth film, it’s entirely possible that it’s the same rex that went on to be killed by the spinosaur in Jurassic Park III!

Either way, this is a neat little joint Easter egg/cameo that serves as some solid connective tissue to The Lost World: Jurassic Park. And it’s entirely possible that this scene echoes the fact that Claire and Owen have adopted Maisie, as the two rexes appear to take kindly to Rexy.

Did you spot the two Isla Sorna/Site B t-rexes in Jurassic World: Dominion? Let us know in the comments down below!