Here's Why 'Jurassic World: Dominion's Lewis Dodgson Is the Most EVIL Villain In the Series - Inside the Magic 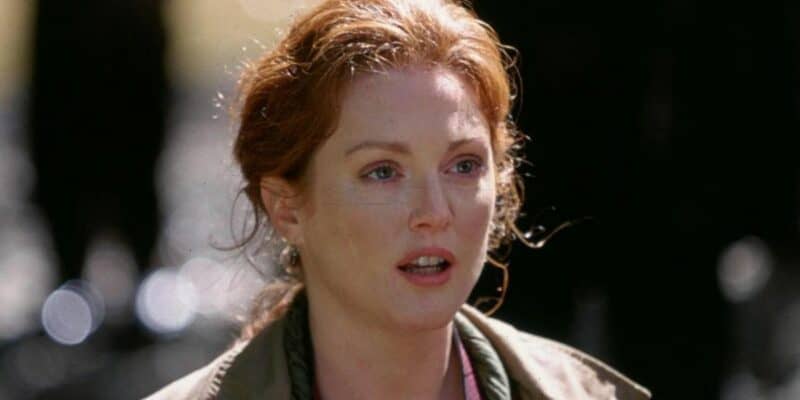 Jurassic World: Dominion (2022) will soon come stomping into theaters (no pun intended if you’ve seen the official prologue), and while we’ve had more than a bite-size glimpse into what kind of prehistoric villains we can expect, whether it’s the fearsome Atrociraptors or the ground-splitting Giganotosaurus, we’ve not seen anything in the way of human villains.

The Jurassic Park movies are no stranger to human antagonists. In Jurassic Park (1993), disgruntled computer programmer Dennis Nedry (Wayne Knight) causes the collapse of the resort by shutting down the power. And The Lost World: Jurassic Park (1997) features many, with a team of hunters led by the ignorant InGen CEO Peter Ludlow (Arliss Howard).

Jurassic Park III (2001) went a little off formula in this area, though — while it has plenty in the way of prehistoric villains (Spinosaurus, Velociraptor, and Pteranadons), there aren’t any human baddies. Unless of course you count Paul and Amanda Kirby (Willian H Macy and Tea Leoni), both of whom are villains in their own right, like many other “good guys” throughout the series.

But while Henry Wu is an “original” Jurassic Park villain (despite not being bad in the 1993 film, which is one of many differences between the film and Michael Crichton’s 1990 bestseller “Jurassic Park”), there’s another well-known villain who fans have been waiting to see return for 29 years. And yes, he appears in Steven Spielberg’s 1993 classic and the book of the same name.

In fact, he also appears in Michael Crichton’s follow-up novel “The Lost World” (1995), in which he’s the main human antagonist. Lewis Dodgson, head of research at Biosyn, is in many ways the overarching villain of the Jurassic Park franchise — after all, he’s the man who set in motion the events that would bring about the destruction of the original Isla Nublar theme park resort.

In the original film, he’s played by Cameron Thor, but has only a small scene in the film, during which he tasks Jurassic Park employee Dennis Nedry with stealing 15 viable dinosaur embryos from the park’s storage facility, so that Biosyn, a rival bioengineering company, can catch up with InGen and “reverse” genetically engineer their very own dinosaurs.

However, while he’s never to be seen again beyond having lunch with Dennis Nedry, you’ll be glad to know that the character will be returning in Jurassic World: Dominion as the CEO of Biosyn (which will also be the company’s second appearance in the franchise), this time played by actor Campbell Scott, who is best known for the Netflix series House of Cards (2013 — 2018).

So, with Lewis Dodgson set to be the main villain of the upcoming sequel, what can we expect from him? Well, before we do a little espionage of our own and dig up as much dirt as possible on this crooked scientist-turned-spy, we will warn you that he is easily the most evil Jurassic Park villain of them all! Find that hard to believe? Hold onto your butts…

Besides the fact Lewis Dodgson is a spy who has hired Dennis Nedry to steal for him, we don’t learn much about Lewis Dodgson in Jurassic Park. However, as explained in the novel “Jurassic Park”, he began his career planning human gene therapy without FDA approval, and later conducted unsanctioned experiments on genes and animals until he eventually joined Biosyn.

There, he is said to have manipulated several scientists from other companies around the world to do his bidding, building a network of contacts which would include Dennis Nedry. After becoming the head of research at Biosyn, Dodgson illegally carried out a rabies vaccine test on farmers in Chile without their knowledge or consent, which resulted in ten deaths.

Like in the film, Dodgson goes on to survive in the book — he doesn’t really appear again beyond his meeting with Nedry. It isn’t until the successor, “The Lost World”, that we see his character return. This time, along with fellow Biosyn employees George Baselton and Howard King, he heads to Site B (AKA “Isla Sorna”), the second InGen island, to finish what he started.

There are many similarities between the book and the film, but there are even more differences. While the main focus in the book is Site B, there are no InGen hunters, nor is there a third-act sequence in San Diego involving the T-Rex. For the most part, the protagonists are the same — Dr. Ian Malcolm, Dr. Sarah Harding, and Eddie Carr, but Lewis Dodgson is the main villain.

In the book, the corrupt Biosyn scientist, along with his two acquaintances, offers Dr. Sarah Harding a boat ride to Site B. But en route, after learning that Harding has travelled alone and that no one knows of her whereabouts (which is similar to what her movie counterpart does), Dodgson attempts to murder her by throwing her overboard into the ocean.

Once they land on Site B, the three men plan to steal tyrannosaur eggs, in a plot that somewhat mirrors a subplot in the movie, involving InGen hunter Roland Tembo (the late Pete Postlethwaite). But in true Jurassic Park fashion, things don’t go to plan — King and Baselton are horribly killed, one by a raptor and the other by a tyrannosaur.

And naturally, things don’t end well for Dodgson, either. In fact, his death might just be one of the most well-deserved in the entire Jurassic Park franchise. When trying to evade a vengeful T-Rex, Dodgson hides under an abandoned jeep in the jungle, however, unfortunately for him, Sarah Harding is hiding under there too, and she wastes no time in getting her own revenge.

Using her legs, Sarah pushes him out and into view of the T-Rex, who picks Dodgson up in its jaws and returns him to its nest, where the tyrannosaur infants feast on him, in a scene that evidently inspired the death of his on-screen replacement Peter Ludlow, who is viciously mauled by an infant rex in the cargo hold of the SS Venture at the end of The Lost World: Jurassic Park.

Whether or not Campbell Scott will capture the Lewis Dodgson we love to hate in the book series remains to be seen, but it will be pretty disappointing if we get yet another larger-than-life, moustache-twirling villain, as opposed to the cold, humorless, untrustworthy, ruthless, intimidating murderer fans of the books are familiar with.

The real question, though, is will he finally get his comeuppance? Well, if the Jurassic Park movies have taught us anything, it’s that anyone who tries to play God tends to end up on the wrong side of the food chain! Or perhaps he will live on for future Jurassic World movies, the possibility of which is something producer Frank Marshall has previously hinted at.

Either way, it looks like Dodgson may have something to do with why there are so many dinosaurs across North America in Jurassic World: Dominion, as recently teased by director Colin Trevorrow in the form of a map. While we know that many escaped at the end of Jurassic World: Fallen Kingdom, the trailer does reveal a large mysterious facility, which could belong to Biosyn.

Are you looking forward to Campbell Scott’s portrayal of Lewis Dodgson in Jurassic World: Dominion? Let us know in the comments below!

Comments Off on Here’s Why ‘Jurassic World: Dominion’s Lewis Dodgson Is the Most EVIL Villain In the Series