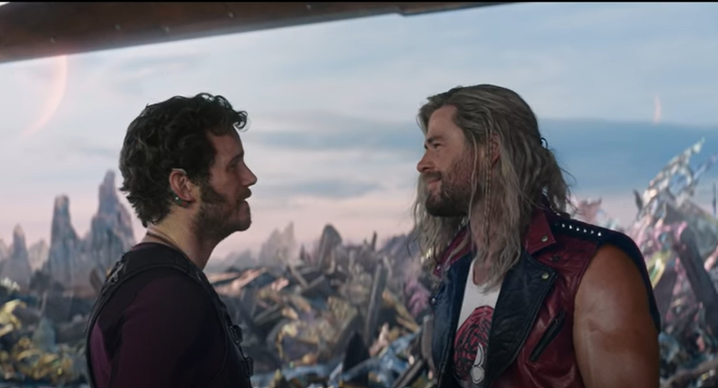 Thor: Love and Thunder (2022) just released a teaser trailer and it seems that Chris Pratt’s Star-Lord may be getting a major change in the upcoming MCU movie.

Chris Hemsworth gets back in shape at the start of the new film as he is seen trying to find out who he really is while in retirement. While some people may choose a relaxing spot to relax while in retirement, it seems that Thor’s idea is to tag along with Chris Pratt’s Star-Lord and the Guardians of the Galaxy. It seems that the group will have traveled for a bit before the movie which means that the crew will definitely be used to Thor’s antics.

Surprisingly at the end of the trailer, Star-Lord tells Thor to “look into the eyes of the people you love,” which then leads to Thor staring with dreamy eyes at Star-Lord. Some fans believe that Thor may be revealed bisexual in this movie, but other fans wonder if Chris Pratt’s character would also be bisexual.

Not that long ago, Marvel revealed that they had plans to make Star-Lord bisexual in the comics and this was scrapped as the Star-Lord series was put on hold. Later on, Marvel went forward with this change as Star-Lord ends up having another love interest when he can’t be with Gamora.

Marvel has placed Star-Lord in a similar situation as it seems he is looking for Zoe Saldana’s Gamora, but since she doesn’t remember their relationship, it’s possible that Star-Lord temporarily gives up and may end up having some interest in Thor.

It’s likely that this might not happen, as Chris Pratt’s religious background may have led Marvel not to make his character bisexual, but this could mean that Star-Lord’s future may be shorter than intended. For Thor, it’s hard to know if he will end up back together with Natalie Portman’s Jane Foster as she will become Mighty Thor in the movie.

While Jane did break it off with Thor, there wasn’t a lot of explanation given as to what actually happened. Thor 4 will definitely explore where the two ended things as they will work together to take down Christian Bale’s Gorr the God Butcherer. While some fans may be wanting Thor to fall in love with Star-Lord, there are definitely other fans who would be furious to see the two male heroes get together.

Do you think Star-Lord will bisexual in Thor 4?