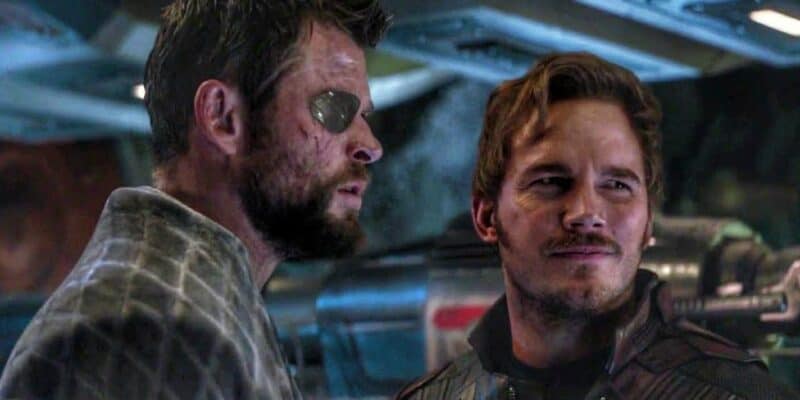 Looks like Chris Pratt’s Star-Lord is going to have some competition in Thor: Love and Thunder (2022).

Normally fans would know what to expect from an upcoming MCU movie based on what’s shown in a trailer, but surprisingly enough, Thor 4 hasn’t revealed any first look at the anticipated movie. Marketing has begun so fans have had to rely on merchandise to get a better look at what to expect in the movie.

So far, fans have gotten a good look at Christian Bale’s Gorr the God Butcher, Thor’s new look in the movie, and what Natalie Portman’s Jane Foster/Mighty Thor will look like. Chris Hemsworth won’t be fat thor anymore as the God of Thunder has gotten back in shape. Based on a new action figure, it looks like Thor will be competing with Star-Lord more than fans originally thought:

Thor is referred to as “Ravager Thor” which means that the God of Thunder has definitely spent some time with the space pirates who used to work with Yondu (Michael Rooker). The Guardians of the Galaxy used to be enemies of the Ravagers, but after the events of Guardians of the Galaxy Vol. 2 (2017), fans should expect the two groups to be neutral.

Related: ‘Guardians of the Galaxy’: Dave Bautista’s Drax FINALLY Gets A Shirt

Knowing that Gorr is killing the gods in the Marvel Cinematic Universe, fans should expect that the Ravagers could play a part in helping Thor. Most likely the beginning of the movie will show this new side of Thor and then have the God of Thunder return back to New Asgard to get help against Gorr.

It’s possible that after Guardians of the Galaxy Vol. 3 (2023), Chris Pratt’s Star-Lord won’t be in the MCU anymore. This is because the original cast will be going their different ways after the next movie. Thor could definitely become the next Star-Lord if Hemsworth sticks around in the MCU any longer. The actor has been playing the character for over ten years so it’s possible that Thor 4 is his final adventure as he could be passing the torch to Portman’s Mighty Thor.

Do you think Thor will become the next Star-Lord? Let us know in the comments section below!