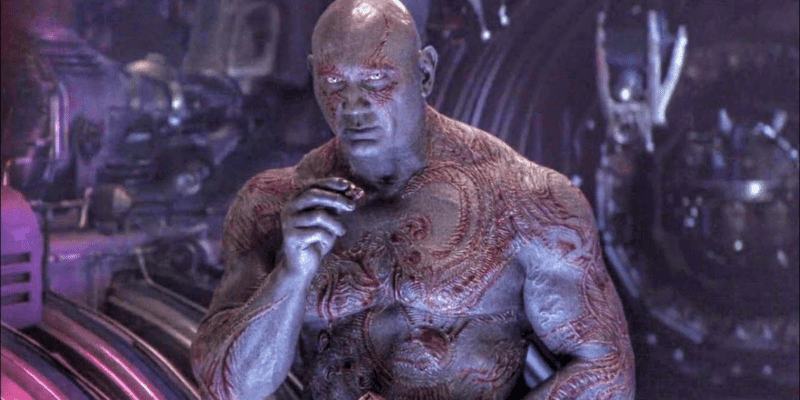 Actor Dave Bautista has been pretty transparent about his plan to exit the Marvel Cinematic Universe following the filming of Guardians of the Galaxy Vol. 3 (2023). The outspoken actor has cited the pressure of keeping his body in peak condition for his perpetually shirtless Drax character as a contributing factor to wrapping up his time with the Guardians franchise. Now, director James Gunn has shared a new promotional poster for the EPCOT rollercoaster Guardians of the Galaxy: Cosmic Rewind, and fans have noticed that Drax is finally wearing a shirt.

Dave Bautista’s career has seen a meteoric rise since joining the Marvel Cinematic Universe as the shirtless, shamelessly literal behemoth Drax in Guardians of the Galaxy (2014). Since then, the 52-year old actor has appeared in Marvel’s Guardians of the Galaxy Vol.2 (2017), Avengers: Infinity War (2018), and Avengers: Endgame (2019). Bautista will also appear in the recently wrapped Thor: Love and Thunder (2023), starring Chris Hemsworth and Natalie Portman.

According to Bautista, part of the challenge of portraying the gray-and-red warrior is the intense work required to keep his body looking lean and muscular for the big screen. The actor is eager to leave the pressure of “the shirtless thing” behind, as he noted in an interview promoting his starring turn in the Zack Snyder zombie film Army of the Dead (2021),

“I’m going to be 54 years old by the time Guardians 3 comes out, and the shirtless thing is getting harder and harder for me… the journey has come full circle and I’m just ready to kind of step aside and wrap it up.”

Director James Gunn recently took to Twitter to share the new promotional poster for the EPCOT attraction, and fans were quick to notice Drax’s new look. Despite Drax appearing to be standing so incredibly still, eagle-eyed fans were somehow able to spot Drax and his sleeveless shirt.

Although the actor Bautista has lamented his lack of wardrobe throughout his Drax career, there is an in-universe reason for his appearance – chaffing. The official Marvel Cinematic Universe canon logic — as established in Guardians of the Galaxy Vol. 2 — is that Drax has “sensitive nipples” and prefers to go without a top.

Following the reveal of the Cosmic Rewind poster, many fans Tweeted their concern for Drax’s comfort. James Gunn responded to one — Twitter user, Sol Stylinson, assuring that Drax was all good, saying:

“Drax’s shirt is lined with fine orloni leather and it feels quite pleasant and unrestrictive. Thank you for being concerned for his well-being.”

Drax’s shirt is lined with fine orloni leather and it feels quite pleasant and unrestrictive. Thank you for being concerned for his well-being. https://t.co/GtYauYAmFn

This recent depiction isn’t the first time Drax has worn a shirt in the MCU. In Avengers: Endgame, Drax wore his formal tank top to the memorial service of the fallen Tony Stark (Robert Downey Jr.).

James Gunn has said that Guardians of the Galaxy Vol. 3 will end his time with the franchise. Dave Bautista — busy with other projects like the Dune (2021) series, and a “buddy action-comedy” project with Jason Momoa  — also has confirmed his departure from the Marvel Cinematic Universe. However, with this wardrobe upgrade, could Bautista be persuaded to return as Drax? Perhaps audiences will finally get to see more of Drax’s backstory and explain his beef with Thanos in detail.

Do you want Dave Bautista to sign on for more Guardians of the Galaxy movies with Marvel Studios? Let us know in the comments!