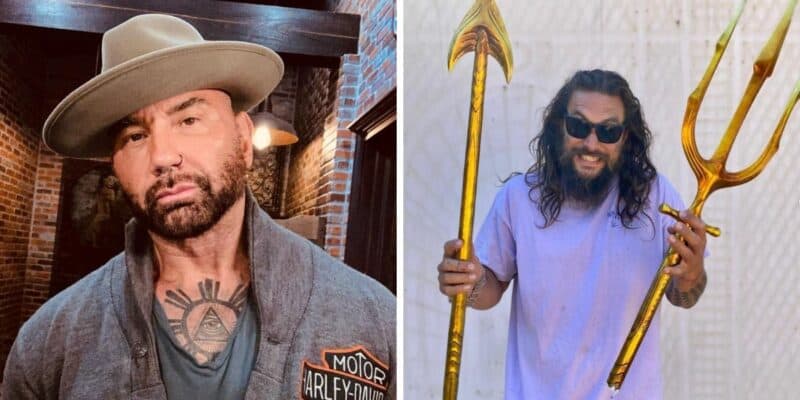 Sometimes there can be a fierce battle between fans of the Marvel Cinematic Universe and the DC Cinematic Universe for superhero film supremacy. However, just because fans will battle each other, that doesn’t mean that the stars of the films will. In fact, the stars of MCU and DCU films can and do become acquaintances and friends in real life — and that can lead to incredibly fun results.

Guardians of the Galaxy star Dave Bautista — who plays Drax in the franchise — recently sent out a Tweet that said he would love to team up with Aquaman star Jason Momoa for a buddy cop movie.

Just going to throw this out into the atmosphere and see what happens. Here we go… Me and Momoa in a Lethal Weapon type buddy cop movie directed by David Leitch. Ok! There it is. Now we wait.

Just going to throw this out into the atmosphere and see what happens. Here we go… Me and Momoa in a Lethal Weapon type buddy cop movie directed by David Leitch. Ok! There it is. Now we wait.😬

Unfortunately for Bautista, Momoa does not have Twitter, so Dave decided to reach out in a more personal way and texted Momoa — who was completely on board with the idea. The two spoke, and now it is being reported that they are, indeed, fleshing out a story to make the movie happen.

In speaking with James Corden on his late-night show, Momoa spoke about how the whole thing went and how the two would pitch the film to Hollywood executives.

“It sells itself, bro,” he said. “Dave loves wearing Speedos. I love wearing board shorts. And both of us with our shirts off. He’ll be grumpy and I’ll be charming. Boom. It sells itself, bro. I have the hair. He doesn’t have hair. We cover all the demographics.”

Bautista became an MCU fan favorite when he first originated Drax in Guardians of the Galaxy: Vol. 1 in 2014. Momoa gained national attention when he portrayed Kahl Drogo in the HBO series Game of Thrones and became the superhero Arthur Curry/Aquaman in 2018. Aquaman and the Lost Kingdom is currently filming with Momoa reprising his role, along with Amber Heard as Mera — which is causing a lot of debate amongst fans due to her lawsuits and claims against Johnny Depp.

While the prospective film is only talk at this point, it would be amazing to see these two great actors come together for a hilarious new film. Both actors are extremely bankable and will bring people into the theaters.

Dave Bautista is currently hard at work on Guardians of the Galaxy: Vol. 3, which is in pre-production, and Momoa is busy filming Aquaman and the Lost Kingdom.

Would you be excited to see Dave Bautista and Jason Momoa team up for a new movie? Let us know in the comments!