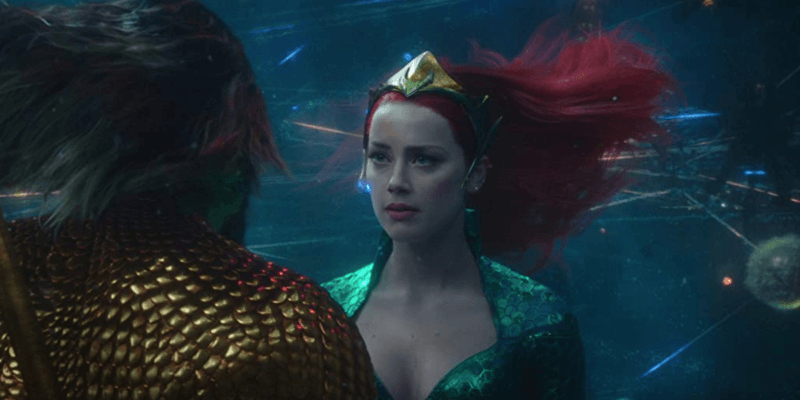 In recent months, amid actress Amber Heard’s ongoing legal dispute with ex-husband Johnny Depp, online reports have abounded that she has been at risk of losing her role as Mera in Warner Bros.’ Aquaman franchise.

Heard is set to star in director James Wan’s upcoming Aquaman 2 (2022) alongside Jason Momoa’s title character. The film, based on DC Comics characters, is expected to dive into the myth surrounding the Lost City of Atlantis, as well as explore Arthur Curry as the kingdom of the ocean.

The film’s official title is Aquaman and the Lost Kingdom.

It has now become quite apparent that Heard certainly hasn’t been fired from the movie and, in fact, is preparing for filming. Today, the actress took her official Twitter account to share a short video of her Mera workout routine. In the caption, she quipped:

For those who have not been following the Johnny Depp and Amber Heard saga — and the opposing hashtags #FireAmberHeard and #JusticeForJohnnyDepp — the situation began when Ms. Heard accused Mr. Depp of multiple counts of domestic violence in U.K. News Group Newspaper publication, The Sun.

Depp and his camp — including Depp’s lawyer and exes Winona Rider and Vanessa Paradis — immediately, and vehemently, denied the domestic abuse claims. Nonetheless, Depp lost his libel case against The Sun in the U.K. High Court, with Judge Andrew Nicol presiding, last fall.

Recently, the Pirates of the Caribbean actor also lost his right to appeal the libel lawsuit ruling in the United Kingdom.

There is, however, a chance that Depp and Heard’s $50 million defamation lawsuit civil case in the United States will be thrown out. This is largely due to the fact that Heard is reportedly the subject of an ongoing Los Angeles Police Department (LAPD) probe due to bodycam footage that recently surfaced, and seemingly confirmed that she lied in her written testimony about a 2016 incident at the then-couple’s downtown Los Angeles penthouse. This incident, of course, occurred prior to their divorce.

Should Heard be charged with perjury or another crime, she could be facing years of jail time. It is important to note that the LAPD has not issued a statement regarding the investigation at this time and, per United States law, Heard is innocent until proven guilty.

Ironically, as a direct result of Heard and Depp’s ongoing legal dispute, the popular Hollywood actor has lost both of his major roles at the moment.

What do you think about Amber Heard keeping her job in the Aquaman sequel? Do you believe Heard’s allegations or do you support actor Johnny Depp?