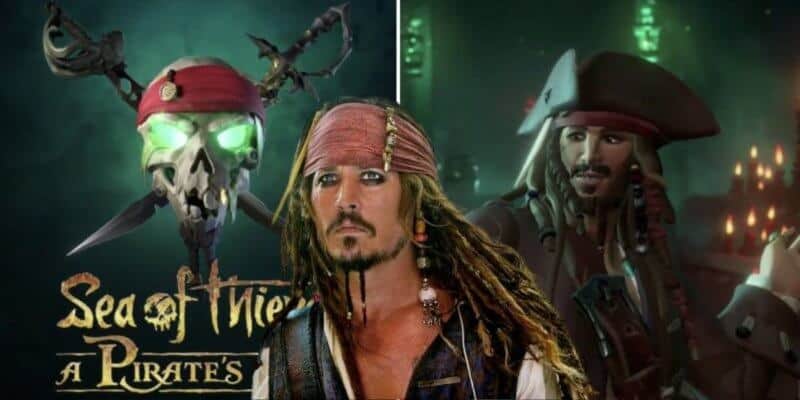 When any Disney fan thinks of Pirates of the Caribbean, the first character that comes to mind is often Jack Sparrow, played by Johnny Depp.

Lately, Johnny Depp has been in the hot seat due to constant attention on his legal case with ex-wife Amber Heard. Heard has accused Depp of domestic abuse, which has escalated to a $150 million legal battle between the two. Depp has also sued external sources for defamation after they took Heard’s side.

There is currently a documentary in development about this legal battle titled Depp vs. Heard; read more about that here.

U.K. Tabloid The Sun used language to paint Depp as abusive towards Amber, and after suing the company, Depp lost. The loss of the case catapulted a downfall in his career, which caused Depp to lose one of many iconic roles fans know and love, Jack Sparrow. Disney has removed Depp from the franchise on film; however, it seems that Disney continues to capitalize on Depp’s version of the pirate everywhere else.

Johnny Depp has a particular look and attitude that he uses to portray Jack Sparrow, and when Guests visit Disney Parks around the globe, that is what they are surrounded by. Any meet and greet with Jack Sparrow, walks, talks, looks, and acts just as Depp did when playing the character. Depp’s rendition of Jack Sparrow is also in various Pirates of the Caribbean attractions across the globe.

Sea of Thieves A Pirate’s Life, a Disney collaboration featuring Jack Sparrow, is coming free to the game June 22.

Sea of Thieves A Pirate's Life, a Disney collaboration featuring Jack Sparrow, is coming free to the game June 22. pic.twitter.com/yI7ptIDhyA

The video game Sea of Thieves collaborated with Disney to create Sea of Thieves: A Pirate’s Life!, which specifically highlights Jack Sparrow. The game is described as:

Free to all players as part of our Season Three update arriving on June 22nd, this unforgettable adventure takes place over five Tall Tales charting a new threat to the pirate way of life from beyond the horizon. After rescuing Captain Jack Sparrow from an unfortunate predicament, you’ll set sail alongside him to uncover secrets, encounter characters old and new, and clash with surprising enemies as you explore the Sea of Thieves – and visit some new locations that’ll be familiar to fans of Disney’s Pirates of the Caribbean film franchise and the theme park attraction.

This is a truly epic quest to protect the Sea of Thieves from the dark ambitions of Jack’s nemesis Davy Jones, and it’s the biggest and boldest update to Sea of Thieves since 2019’s Anniversary Update.

We’ve worked closely with the Walt Disney Games team throughout this whole process, crafting an original story which brings out the best elements of both Sea of Thieves and their beloved Pirates of the Caribbean franchise. To see iconic characters like Jack Sparrow and his crew represented in Sea of Thieves’ unique art style, interacting with our own pirate universe – it’s been such an amazing experience to bring this whole thing to life and we can’t wait for you to dive in.

Interestingly enough, once the announcement was made, many started to wonder if Johnny Depp was the voice of Jack Sparrow in the game, as the voice did sound the same.

One of those was Twitter user Mr. James Freeze (@mrjamesfreeze), who said:

Is Jack voiced by Johnny Depp?
It sounded like him but I am not sure.

Is Jack voiced by Johnny Depp?
It sounded like him but I am not sure.

To answer the question, Sienna (@winonasrider) used a quote stating:

“It’s unclear if any of the original voice actors are reprising their roles for the game.”

They don’t keep Johnny Depp who gave them one of the most iconic characters portrayals ever but they still gladly use his creation.. Just apologize and make the man an offer already.

"It's unclear if any of the original voice actors are reprising their roles for the game."

They don't keep Johnny Depp who gave them one of the most iconic characters portrayals ever but they still gladly use his creation.. Just apologize and make the man an offer already.

It would seem highly unlikely for this to be a Disney collaboration with Johnny Depp involved, considering they have already released him from Pirates of the Caribbean 6. The game is also not present on Depp’s IMDB page, which it would be if he were to have voiced the character.

Disney continues to use Depp’s portrayal of the character — including hiring a voice actor that sounds just as Depp does for the video game, even though they have chosen not to have him play Sparrow in future films. Depp’s popularity as the character of Jack Sparrow is immense, so much so that fans have petitioned to keep him as Sparrow. Even if Disney has decided to end the on-screen relationship, it is no secret that many are not happy with that decision.

Good news, however, it seems that the character of Jack Sparrow lives on through Sea of Thieves: A Pirate’s Life!

What do you think of Disney collaborating on a game that includes Jack Sparrow without Johnny Depp?