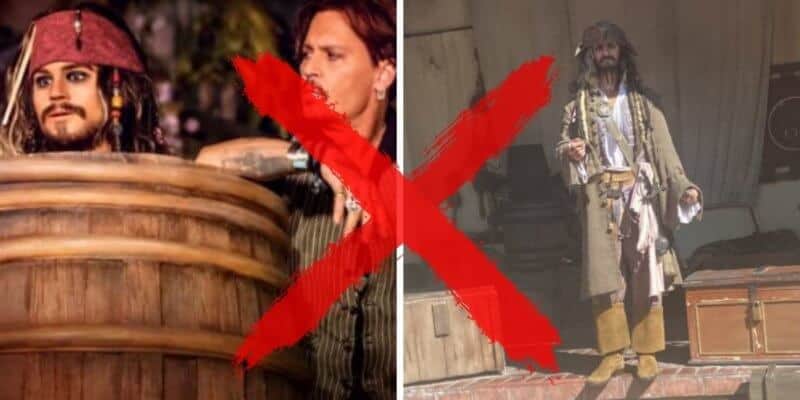 If you have ever attended Mickey’s Not-So-Scary Halloween Party, you are probably familiar with the character meet and greets that were offered during the ticketed event. Guests had the opportunity to meet Mickey and friends in their Halloween costumes, fan-favorite Disney Villains, and of course, the one and only Jack Sparrow.

However, as many of you know, Mickey’s Not-So-Scary Halloween Party is not being offered this year and instead, Magic Kingdom will host a new event called Disney After Hours Boo Bash. Tonight is the first night of the special ticketed event, and Disney is finally releasing additional details, including character sightings and cavalcades that will be offered during Boo Bash.

But one fan-favorite character seems to be missing from the line-up — Jack Sparrow.

Jack Sparrow used to greet Guests near Pirates of the Caribbean in Adventureland during Mickey’s Not-So-Scary Halloween Party — which is actually a current character experience being offered during regular Park hours, though it is important to note that it is a socially distanced offering and not a pre-pandemic style character meet and greet.

However, after reviewing the character sightings and character cavalcades on the Walt Disney World website that will be included in Disney After Hours Boo Bash, Jack Sparrow was not listed. This could be because, as we mentioned above, Jack Sparrow currently greets Guests during regular Park hours in Adventureland, or it could be because of the ongoing legal battle that Johnny Depp is involved in.

In case you aren’t aware, Pirates of the Caribbean star Johnny Depp has been in the news a lot lately as he has been involved in a legal battle with his ex-wife and actress Amber Heard. The case has been quite serious as Heard accused Depp of domestic abuse and holding her hostage at one point.

Depp lost the libel case and has since spoken out regarding the support of his fans and the decision by Warner Bros. for the actor to resign from his role as Grindelwald in Fantastic Beasts. Disney also dropped Depp for the reported Pirates of the Caribbean 6 film.

At this time, Disney has not announced why Jack Sparrow will not be part of Disney After Hours Boo Bash, but Inside the Magic will update you as we get information.

Are you upset to see Jack Sparrow not listed under the character sightings and character cavalcades on the Walt Disney World website for Disney After Hours Boo Bash? Let us know in the comments below.