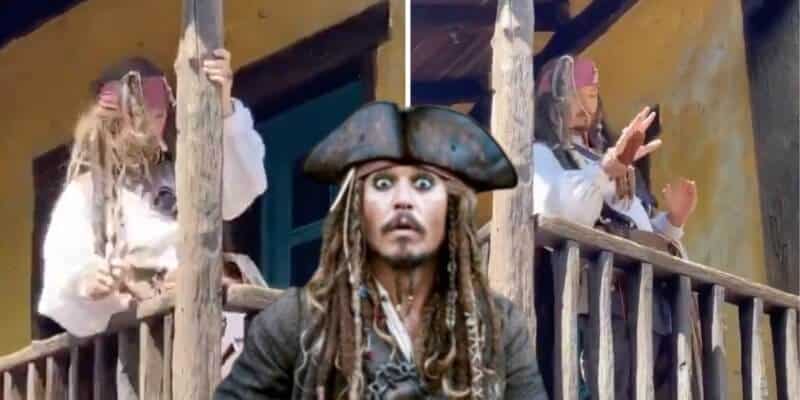 Yesterday was a big day for Disneyland Paris as the Park finally reopened after closing down for a second time due to the ongoing pandemic. Now that Disneyland Paris has opened up its gates, all Disney Parks across the globe are back in operation, creating magic for Guests!

Disneyland Paris had many characters around the parks to give Guests interactions as they experience their day to celebrate the opening. One character that was back in action immediately was Jack Sparrow from Pirates of the Caribbean. In Disneyland Paris, Guests can eat at Captain Jack’s – Restaurant des Pirates, and since the location’s exterior has a wrap-around balcony, they can now find the rum-loving pirate there!

Disney Cave of Wonders (@Cave0fWonders) was back at Disneyland Paris on opening day and recorded a video of Sparrow stumbling around the balcony, much like Johnny Depp’s rendition of the character from the films.

As we continue to see across all Disney Parks, Disney showcases Jack Sparrow as a popular character for meet and greets and interactions. The Jack Sparrow character that Guests can meet or see on various renditions of the Pirates of the Caribbean attraction is a copy of Johnny Depp’s characterization of the pirate, even though Disney has given Depp the boot from future Pirates of the Caribbean movies due to the ongoing domestic abuse legal battle between Depp and ex-wife Amber Heard.

Although understandably, the Pirates of the Caribbean attractions continue to show off Depp’s Jack Sparrow throughout the ongoing drama that Disney has chosen to distance themselves from, it is interesting to see that they are continuing to heavily showcase his character in the parks even though they have decided to part ways.

Considering how deep the Johnny Depp x Jack Sparrow fan base runs, keeping this version of Sparrow in the parks is a great way to keep Guests happy and coming back for more, especially since he will no longer be available via the film franchise’s upcoming movies.

Do you think Disney should continue to showcase Depp’s Jack Sparrow in the parks even though they removed him from future films?