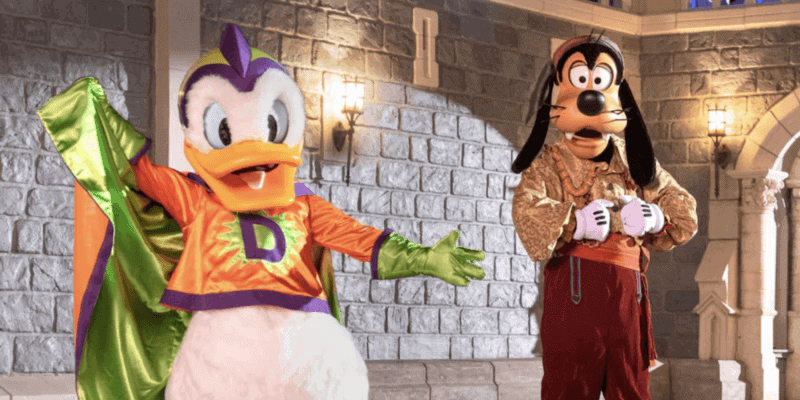 When Walt Disney World Resort announced that Guests would not get to experience Mickey’s Not-So-Scary Halloween Party for the second year in a row — the popular Magic Kingdom party was canceled due to the COVID-19 pandemic in 2020 — they had a surprise up their sleeve! Enter Disney After Hours Boo Bash.

The new Magic Kingdom After Hours event running on select nights from August through October is nearly sold out, despite some nights being priced between $170 and $200 per ticket, so Guests clearly can’t wait to get into the Halloween spirit this year.

Character Sightings will occur across the park, so be on the lookout! You could see:

Goofy
Chip ‘n’ Dale
Miss Carlotta, Miss Renatta and Broome the Butler at the Haunted Mansion
Foulfellow and Gideon
And be sure to catch the Cadaver Dans as they make a special comeback (from the dead) appearance.

These spooky songsters emerge from their tombs for a cappella performances. You won’t want to miss this—it’s to die for!

It is worth noting that some popular meet and greets that were typically available during Mickey’s Not-So-Scary Halloween Party are not listed for Boo Bash — Jack and Sally from Tim Burton’s The Nightmare Before Christmas and Captain Jack Sparrow from the Pirates of the Caribbean franchise are notable omissions from the list of character sightings.

However, Jack and Sally will appear in their own cavalcade during the event, just as they have during past Halloween seasons.

Note that Disney is not describing these character appearances as meet and greet experiences, but rather character sightings. At this time, Walt Disney World officials have not confirmed whether or not character sightings and greetings will be socially distanced, but it seems likely.

Furthermore, bear in mind that Disney recently updated its face mask policy to align with current CDC guidelines. Guests age 2 and over are required to wear appropriate face coverings while indoors, including in queues and on rides and attractions.

Guests are not required to wear face masks outdoors.

Are you attending Disney After Hours Boo Bash during the Halloween season this year?