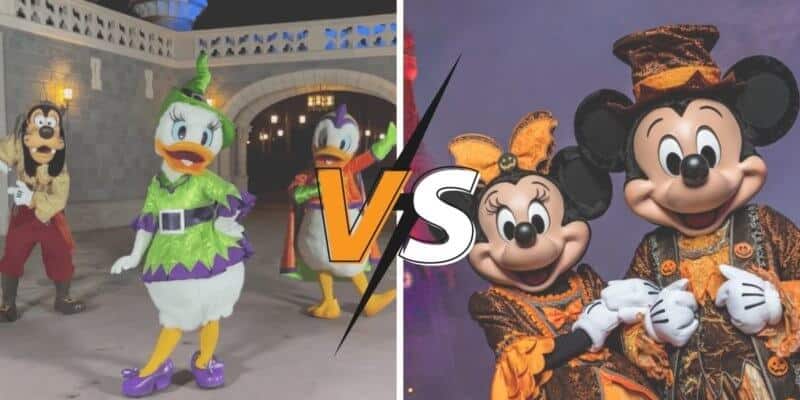 Walt Disney World recently announced that instead of hosting Mickey’s Not-So-Scary Halloween Party at Magic Kingdom this year, Guests will instead be able to attend a new after-hours event called Disney After Hours BOO BASH.

But what are the differences between the two after-hours events? Here is everything you need to know.

Guests of all ages will also be able to dress in costume for the occasion and even get their fill of Halloween candy, exclusive food offerings, spooktacular entertainment, experience favorite attractions, and more!

This year’s Halloween event will run on select nights from August 10 through October 31 at Magic Kingdom.

With all of this being said, at first glance, it may seem like there aren’t many differences between the two events — Disney After Hours BOO BASH and Mickey’s Not-So-Scary Halloween Party.

Well, we are here to break it down for you and let you know exactly what experiences and offerings won’t be available at the new BOO BASH event that are typically offered during Mickey’s Not-So-Scary Halloween Party.

Again, at first glance, it may not seem like there are big differences between the two Magic Kingdom after-hours events, however, before you buy a ticket to Disney After Hours BOO BASH, make yourself aware of what won’t be available at BOO BASH that is typically available at Not-So-Scary.

Due to the ongoing pandemic, Walt Disney World has not been hosting nighttime spectaculars, including fireworks. Because of this, at the time of publication, Disney After Hours BOO BASH will not host a fireworks display for Halloween.

This is one of the major key differences between BOO BASH and Not-So-Scary as during Mickey’s Not-So-Scary, Magic Kingdom would light up the night sky with Disney’s Not-So-Spooky Spectacular.

The Walt Disney World website describes this fireworks spectacular as:

Mickey’s Boo-to-You Parade is one of the most iconic parts of Mickey’s Not-So-Scary Halloween Party at Magic Kingdom. The Walt Disney World website describes this one-of-a-kind parade as:

Masquerade with costumed Characters—including stars from the Haunted Mansion—for a night of family-friendly frights.

However, once again, due to the ongoing pandemic, Disney has not been hosting parades. Instead, Walt Disney World has been bringing cavalcades to the theme parks throughout the day as they continue to operate amid the ongoing pandemic. These pop-up cavalcades include small floats (at Magic Kingdom they are parade floats while at Animal Kingdom they are riverboats) with some of our favorite Disney pals who Guests can wave to from a safe social distance.

So, even though BOO BASH will not host Mickey’s Boo-to-You Parade, they will offer Halloween-themed cavalcades special just for this after-hours event.

If you are looking to attend BOO BASH, be warned that, at this time, the iconic Hocus Pocus stage show has not been confirmed. The Walt Disney World website describes this villainous show as:

Chills, thrills and villains await during a wickedly fun celebration hosted by the Sanderson Sisters from Hocus Pocus.

Disney Parks Blog did share that Guests will see special performances by the Cadaver Dans, but other than that, they did not confirm other entertainment offerings coming to BOO BASH. Therefore, if you were planning on attending the new after-hours event for the shows, know that these may not be offered.

Disney Parks Blog shared the following information, in part, about the upcoming event:

Guests young, old and immortal can dress in costume for the occasion and get their fill of Halloween candy. As an important reminder, costume masks are not permitted for adults; they can only be worn by children younger than 14. In addition, all guests are required to wear approved face coverings during the event. Before you arrive, check our Know Before You Go page and Costume Guidelines.

In case you aren’t familiar with Disney After Hours, it’s a special event that’s open to a limited number of guests, after normal park operating hours. The experience offers low wait times at more than 20 attractions from classics like the Haunted Mansion and Space Mountain, to newer favorites like Seven Dwarfs Mine Train. It’s a ghostly good time for all!

Will you be attending Disney After Hours BOO BASH? Let us know in the comments below.