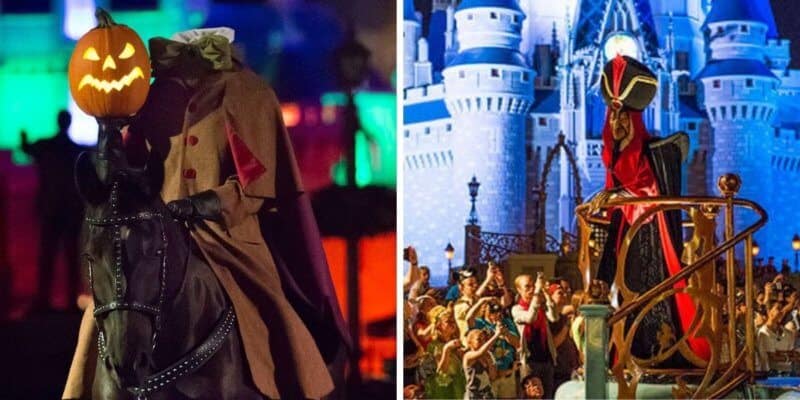 Just recently, Walt Disney World announced that a brand-new event would be coming to celebrate the Halloween season. Despite not seeing Mickey’s Not-So-Scary Halloween Party return this year, Guests can look forward to a new after-hours event called Disney After Hours BOO BASH.

Disney After Hours BOO BASH will be a special three-hour event that begins when the theme park closes! Guests will experience party music, decorations, and character cavalcades to celebrate Halloween. But that’s not all because Guests of all ages will be able to dress in costume for the occasion and even get their fill of Halloween candy, exclusive food offerings, spooktacular entertainment, experience favorite attractions, and more!

This year’s Halloween event will run on select nights from August 10 through October 31.

One of the entertainment offerings that will be available during BOO BASH is Halloween-themed cavalcades. In case you aren’t familiar, Walt Disney World has been bringing cavalcades to the theme parks throughout the day as they continue to operate amid the ongoing pandemic. These pop-up cavalcades include small floats (at Magic Kingdom they are parade floats while at Animal Kingdom they are riverboats) with some of our favorite Disney pals who Guests can wave to from a safe social distance.

During the Halloween season in 2020, Disney World did not host Mickey’s Not-So-Scary Halloween Party or any type of after-hours event, but instead, Magic Kingdom brought Halloween-themed cavalcades to Guests during regular park hours. One cavalcade included Mickey, Minnie, Pluto, and other pals wearing their favorite Halloween costumes while another one, Pooh’s Halloween Trolley, included Winnie the Pooh and friends.

What Cavalcades Could Come to BOO BASH?

So with that being said, we were wondering if Disney would bring those same Halloween cavalcades to BOO BASH this year, or if they will debut brand-new ones specifically for the after-hours event.

It is important to keep in mind that at this time Disney has not stated which cavalcades will be included during BOO BASH, but here are some ideas we came up with that we would love to see appear.

One experience I would love to see Walt Disney World include during BOO BASH is the iconic Headless Horseman. Typically, Guests can catch him riding at the beginning of Mickey’s Boo-to-You Parade, which occurs during Mickey’s Not-So-Scary Halloween Party.

Since we will not be able to catch this parade during the 2021 season, I, personally, would love to see Disney still bring some elements of the Halloween party to BOO BASH — including the Headless Horseman!

Also during Mickey’s Boo-to-You Halloween Parade, Guests are able to spot some of the most iconic Disney Villains as they dance to “It’s Good to Be Bad” to close out the experience. And last year, Magic Kingdom brought this section of the parade to Guests as one of their Halloween-themed cavalcades (as you can see in our Instagram video above).

I would love to see Disney keep this cavalcade and bring it back for BOO BASH — I mean, it’s not spooky season without some of the most iconic Disney villains, right?

Another iconic part of Mickey’s Boo-to-You parade (and my personal all-time favorite) is the gravediggers and hitchhiking ghosts. These residents of the Haunted Mansion break out those shovels and slam them onto the concrete, causing sparks to pop up off the ground — all perfectly in sync with the music. It’s safe to say, this makes for an unforgettable experience.

If you haven’t seen the parade, here is a clip from Disney Parks showcasing the incredible work these Cast Members put in to make this magic every Halloween season:

Of course, Disney will want to bring some friendly spooks to Guests as well, since it is the Most Magical Place on Earth after all. So for those Guests who maybe aren’t a fan of the spooky and scary, Disney could bring back the iconic Mickey’s Happy Halloween Cavalcade, which was used during park hours last fall season.

Will you be attending the new Disney After Hours BOO BASH? What cavalcade do you hope to see? Let us know in the comments below.

Comments Off on Which Cavalcades Will Come to Disney After Hours BOO BASH?