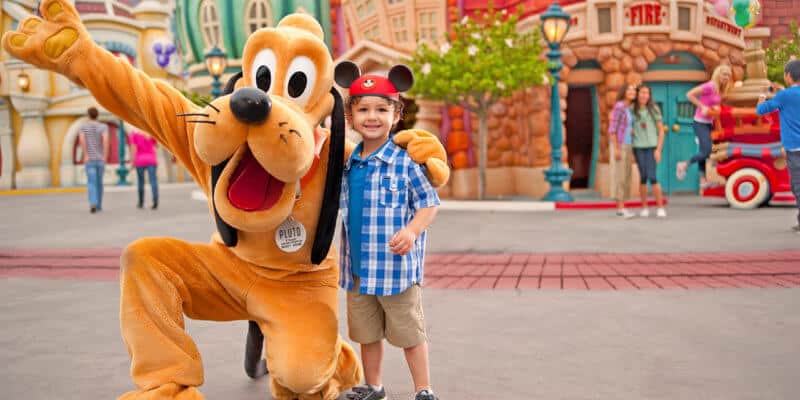 We all know how FAST kids are. And we also know what heroes dogs are! Those two facts came crashing together today at Disney’s Hollywood Studios . During the afternoon Cavalcade on Hollywood Boulevard, Pluto’s quick puppy paws snagged a kiddo from running into Minnie Mouse ‘s vehicle! What a dog!

At Disney’s Hollywood Studios, there’s a fun Fab Five Disney character (and more) cavalcade to add some much-needed magic to the Parks. Mickey and Minnie Mouse ride atop convertible cars, with friends walking alongside and behind. Pluto, Chip, Dale, Fancy Nancy, Vampirina, and more join in the fun as the cars slowly drive by Disney Guests.

Facebook user Jodie was enjoying the parade during the February afternoon when the unthinkable happened. A quick kid slipped off the curb and into the cavalcade, nearly falling into Minnie’s moving vehicle. A quick-thinking and sure-footed Pluto was walking alongside the vehicle and ended up catching the tot before the unthinkable happened. Minnie’s car stopped immediately, and as you can see by Jodie’s photo below (Disney guests were blacked out for privacy), a parent was right on the kid’s heels.

Jodie snapped this photo after everything was safe, and the child had gotten up after falling into Pluto’s paws. Even the most attentive parent can have a kiddo slip out of their grip at the busy Disney parks. On the post that Jodie created, a former Parade Crew Cast Member weighed in, saying:

Kids are kids. Sometimes you can tell if the parent is actually parenting, other times kids will move fast and in a blink of an eye they’re gone. I used to work Move It, Shake it and we would go over safety briefings for things exactly like this. It’s not the parents fault. The parent wasn’t pushing the kid into the parade or telling the kid to do it. […] But issues like this happen. Let’s just appreciate the Pluto knew what to do and handled it like a good cast member should.

And it’s true. Kids are fast and several other Facebook users agreed. Child leashes, bracelets, and more can save an enthusiastic young Disney fan from instances like these if the parents have a need to use them. Lost parents show up at Guest Services all the time… and Cast Members are trained to help locate them, as well as to help in these parade instances.
We just want to give pup Pluto plenty of belly rubs and a bowl full of his favorite treats for helping this family out. We rate Pluto 12 out of 10. Would definitely pet. Now if only those Meet and Greets would return we’d be able to give him a thankful hug!
Leave us a comment about your favorite Pluto interaction!