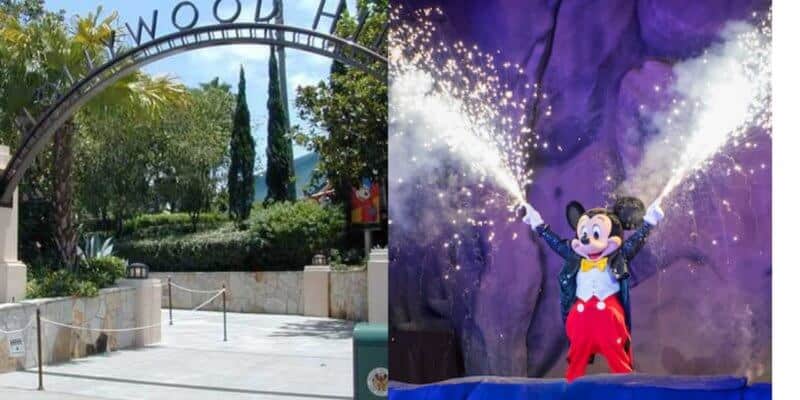 Disney music has a certain power that can make any Guest who hears it, feel transported. The music we hear in the parks from the EPCOT entrance loop to the first few notes of Happily Ever After at Magic Kingdom, instantly strike each of us to our core and allows us to feel the emotion and story that the music evokes. One particular soundtrack that can send excitement down your spine is the Fantasmic! score.

Well, although the lagoon is still currently drained, and we have no idea when Disney plans to bring us back into Mickey’s dreams, today Guests were able to remember what it felt like when we could!

The pre-show music to Disney’s Hollywood Studio’s Fantasmic! nighttime show blared from The Hollywood Hills Amphitheater this afternoon and we must admit — it is nice to hear that music again!

@_justmateo_ took to Twitter this afternoon as he was waiting in line for Tower of Terror to alert us that he heard the pre-show music loud and clear, and Disney fans are freaking out!

The chain follows up with Disney fans wanting to know more. As you can see @-eddiie’s reaction is much like all of us who are missing the feeling of walking down that super long pathway to Disney tunes as we head to our silver bench.

As we mentioned earlier, we have no idea as to when Fanstasmic! will be returning to Disney’s Hollywood Studios. We last reported that the lagoon, which hosts the show, was still drained, which is a little bit of a sad sight to see. Mickey’s steamboat may be sitting on an exposed track, but at least we were reminded of the magical life that theatre can posses today.

Just by playing the music, Guests were reminded that the theatre will one day reopen, and memories of past Fantasmic! shows came rushing back. Disney may have been testing the speaker system after months of not being in use, or they could have just wanted to add some magic into today’s park Guests day. Until we know of the show’s return date, we will not be able to tell if this is an indicator that the show could be returning. But at least this is a step in the right direction.

Please keep in mind Disney has not yet announced when fireworks or nighttime shows, like Fantamic! would be returning to the parks. Inside the Magic will continue to update you as we get information regarding these events.

Listen to the pre-show music today

The pre-show music for Fantasmic! is complied of various Disney songs! If you want to check out a good playlist, you can head to Spotify and search ‘Fantasmic! Pre Show Music’. Then, you can be like me and have a dance party in your room and pretend you are about to hear that epic score and watch Mickey shoot fireworks from his fingers. Also, with HarmonioUS possibly testing at EPCOT, we can only hope that nighttime fireworks could be returning to Disney World soon!

A Night When Dreams Come True!
Fast asleep, Mickey Mouse dreams that he is a mighty sorcerer’s apprentice with the power to control water, color and magic. The Disney Villains—including Maleficent in the form of a towering, 40-foot-tall dragon—turn Mickey’s dream into a nightmare, but don’t underestimate the power of Mickey’s imagination!

Stay tuned to ITM as we continue to report more on the possible re-opening of Fantasmic!, whenever that may be.

Do you think this means Fantasmic! could be reopening? Let us know!