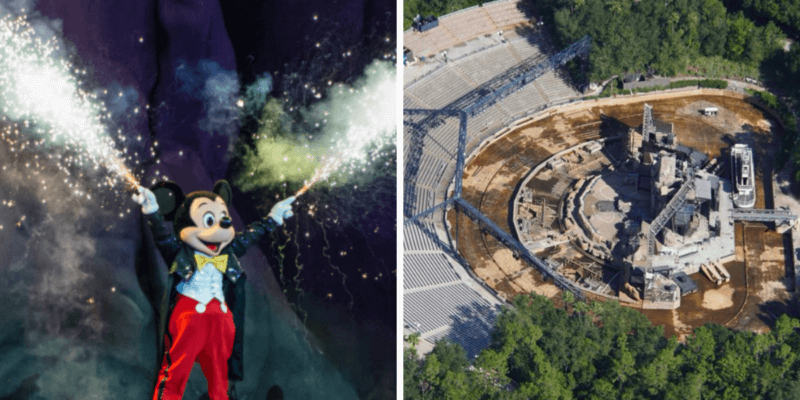 When will Fantasmic! reopen at Disney’s Hollywood Studios?

When Walt Disney World Resort first reopened, Disney announced that nighttime spectaculars would not be available for Guests. That means that for the time being — since the theme parks reopened in mid-July — Guests haven’t been able to see Happily Ever After at Magic Kingdom or Fantasmic! at Hollywood Studios, amid other nighttime shows.

But when will Fantasmic! be up and running again? We aren’t so sure, but it’s appears that the show won’t be operating anytime soon. The latest aerial images from @bioreconstruct show that the Fantasmic! lagoon is still drained.

Aerial look at the drained Fantasmic stage. Zoom in, much detail to explore. Including a golf cart. pic.twitter.com/tLPnaE3hIN

We reported a few different updates to share that the Fantasmic! lagoon at Hollywood Studios was drained, likely for maintenance. But we continue to wonder if it is possible for the show to return again sooner rather than later. It is true that Fantasmic! draws large crowds to the park at night. But Disney implemented designated seating with social distancing, and if they significantly limited the number of Guests who were allowed into the area to watch the show, then perhaps it is possible it could return in the not-so-distant future.

Keep in mind that enough Cast Members have to be called back to work to perform and operate the show, as well.

Only time will tell when Fantasmic! will be operating again, and we’ll continue to monitor the news and update Inside the Magic when Disney makes any official announcement.

Until the show is back up and running, welcoming Guests back to the magic of Fantasmic! again, you can watch a full video of the Disneyland version below:

What’s your favorite nighttime spectacular at Walt Disney World Resort? Have you see Fantasmic! at both Disney’s Hollywood Studios and Disneyland in California? Which do you prefer? Let us know in the comments!

Want to book a trip to Disney World? We’ve got you covered. Click here to book your next Disney vacation with the Authorized Disney Vacation Planners at Academy Travel.