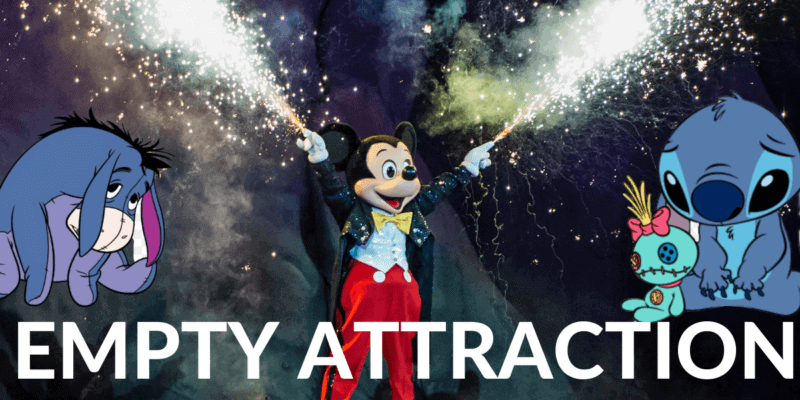 Since the beginning of the pandemic, we’ve seen some amazing aerial shots of Walt Disney World. But if you want to see something really sad, just check out this picture of Fantasmic! drained following the temporary pausing of all nighttime spectacular shows.

The iconic attraction has been at Disneyland since 1992 and Walt Disney World since 1998. It debuted at Tokyo Disneyland’s DisneySea theme park in 2011.

Fans of Fantasmic! will be upset to see it in its current appearance, as the entire attraction has been drained.

This aerial photo from the good folks at @Bioreconstruct shows the drained river around the stage where Mickey famously does battle with the Disney villains including Aladdin‘s Jafar, The Lion King‘s Scar, The Little Mermaid‘s Ursula, and eventually, Maleficent in her dragon form. The drained Fantasmic! lagoon is likely due to maintenance being done for the show, although we don’t yet have a date when the nighttime spectacular will be available again at Disney’s Hollywood Studios.

The viewing area looks crazy bare without any guests or Disney characters; you’d have to really use your imagination to picture Fantasmic! on this stage. 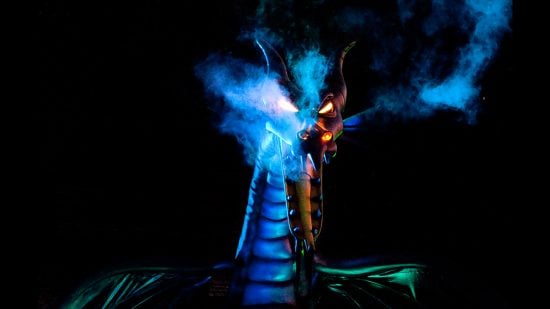 It’s a beloved attraction and a staple of this Disney theme park. Seeing Fantasmic! in its current state sure is weird as well as a little sad.

Any Disney park fan will tell you what an amazing experience Fantasmic! is. Starring Sorcerer Mickey in his Sorcerer’s Apprentice get up, what follows is nothing short of epic, with fireworks, a water screen, dancing lights, and pyrotechnics taking us through Mickey’s imagination.

The attraction has remained beloved since its introduction in Walt Disney World as well as at Disneyland park and the Tokyo DisneySea park. Any lifelong Disney fan can tell you what a sensational show this nighttime spectacular is; it’s truly filled with magic. The Florida attraction adds an extra bit of magic to any trip and helps to reinforce Walt Disney World Resort as the happiest place on Earth.

We just hope that Fantasmic! is able to reopen soon with its water features intact. Though at the pandemic’s current rate of infection in the US, it seems like it’s going to be a long time before Disney’s Hollywood Studios and other parks like The Magic Kingdom will open their nighttime spectacular shows, as the need for social distancing remains at an all-time high.

Still, Mickey’s dream needs to up and running again soon; who else is going to defeat that dragon?

What do you think about this image of the Fantasmic! lagoon drained? Let us know in the comments below.

If you are looking to plan a trip back to Walt Disney World, our friends at Academy Travel are standing by to provide expert guidance and help you plan the most magical trip yet. Click here to learn more and receive your free, no-obligation quote today!