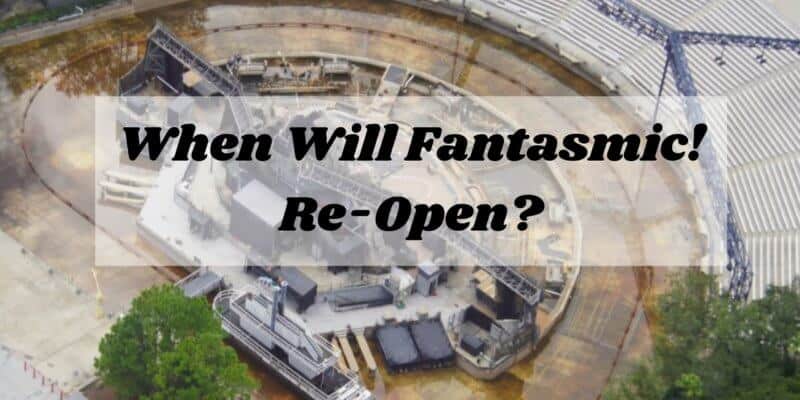 To quote Hans from Frozen, “Can I say something…crazy?”

It’s crazy to think that Disney’s Fantasmic! has not run a show in months, and it’s crazier to see the lagoon show drained and looking a little lifeless. Although we have seen photos of Fantasmic! in its newly drained state, we were definitely hoping that the cause of the drainage was due to maintenance and that the show would be launching again soon.

While maintenance may very well be the case, after weeks of the lagoon at Disney’s Hollywood Studios being empty, we are now starting to see it fill again with rain water. With typically wet Florida weather and rainstorms, this is definitely to be expected, but the aerial photos updated from @bioreconstruct on Twitter make Fantasmic! look a little abandoned.

Aerial looks at Fantasmic theater in Disney's Hollywood Studios. It seats 7,900 and has standing room for an additional 2,000 guests. Stage has accumulated rain water now. No performances scheduled, due to the pandemic. pic.twitter.com/YqpA7uEHQL

Fantasmic! at Disney’s Hollywood Studios has not re-opened with the rest of the park like most nighttime shows. This is possibly due to the pandemic and Disney’s social distancing requirements. The show would cause heavy crowding and would likely cause Guests to stand too close to other parties.

Even if maintenance is occurring, the fact that Disney Parks officials have left rainwater flooding the Fantasmic! site means the nighttime spectacular may only be seen in Mickey’s dreams for now.

Fantasmic! is a show that you can catch at many different Disney parks worldwide, from Disney’s Hollywood Studios to Disneyland in California to Tokyo Disney Resort. It is a cult-classic nighttime spectacular that really can make your day at a Disney theme park even more jaw-dropping and we do hope to return soon!

The cool thing about these photos is that we can see the tracks for Fantasmic!, which we typically would not be able to see with a filled lagoon. Mickey’s steamboat track is in view, as well as the steamboat itself. For all of us Disney nerds, seeing the loading platform where Aladdin, Cinderella, The Fab 5, and all of our favorite Disney characters hop-on for the finale is a real treat. We also have seen progress on EPCOT’s HarmonioUS, so perhaps nighttime shows at Disney are coming back sooner than we think!

Are you excited to see Fantasmic! return to the parks? Let us know!

Comments Off on Updated Aerial Views Of A Drained Fantasmic! Stage