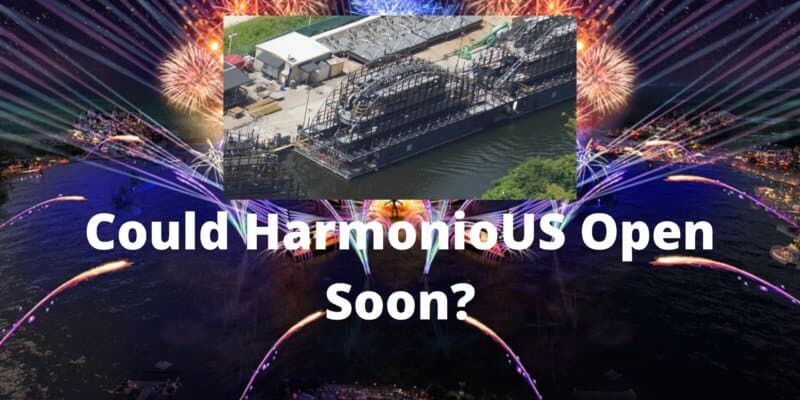 It was only just recently that we were able to see aerial photos of the HarmonioUS construction begin again, and now things are really moving forward!

HarmonioUS is the new EPCOT nighttime spectacular coming to the Disney theme park soon. After the closing of Illuminations at EPCOT, park going fans were very sad the nighttime show was leaving the world showcase. In the interim we were given EPCOT Forever, which was a much smaller scale show, but still very nostalgic and almost a good-bye to the old EPCOT playing songs from extinct attractions.

This was all a goodbye to bring us to the future of EPCOT which would be HarmonioUS. But before we get into all of that, let’s check out the most recent progress the show has seen.

Where are we at with HarmonioUS?

HarmonioUS was initially scheduled to open in Summer of 2020 at the Disney park, but with September rolling around and construction having halted in the beginning of 2020, that date is now something fictional.

When we last saw the barges for the new show being worked on, the construction updated looked like this:

Aerial look yesterday at what will probably be 4 nearly identical barges of EPCOT's new HarmonioUS show. Each barge in a different state of construction, they have been built as if in an assembly line. pic.twitter.com/x8AMMYRTFL

Aerial view of one of the barges under construction for the new nighttime EPCOT show, HarmonioUS. pic.twitter.com/NMPjFfiMoh

Now that’s what I call progress! (10 points if you get the reference) The barges are now erect and looking like a lot more of a complete and finished project which is exciting to see. A new Disney fireworks show that is expected to be the biggest nighttime spectacular any Disney park has ever seen is definitely something to be looking for to.

Aerial look at construction of at 2 of 4 barges in EPCOT's new HarmonioUS show. Semicircular walls will have video screens, with a rotating arm at center for additional lighting and effects. pic.twitter.com/OkNOLMOUPp

Thanks to @bioreconstruct on Twitter we can now see an:

“Aerial look at construction of at 2 of 4 barges in EPCOT’s new HarmonioUS show. Semicircular walls will have video screens, with a rotating arm at center for additional lighting and effects.”

And of course the big centerpiece!

Aerial look at the 3 barges that will be joined to form a large central sphere in EPCOT's new nighttime show, HarmonioUS. pic.twitter.com/ySpM3zHkM1

I don’t know about you but this thing looks like it can handle a lot of fireworks shooting off it. We know HarmonioUS will be joining us with Disney music from classic films and it will be exciting to relive all of those stories once again at EPCOT with this new show.

What do you think? Could HarmonioUS open soon? Let us know!

Comments Off on Could EPCOT’s HarmonioUS Open Soon? Progress Being Made