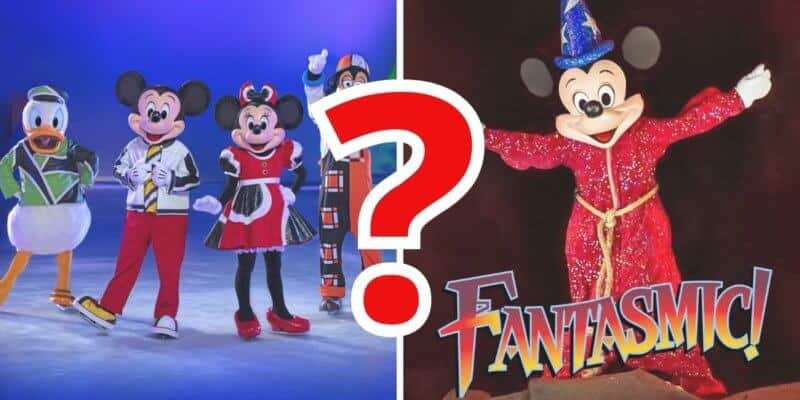 On October 6, Disney announced that Disney On Ice will resume touring very soon, with a number of new health and safety protocols in-place, of course, for Guests who attend performances.

Some of these measures include reduced capacity, seating pods (which must be purchased in their entirety and may not be divided), face coverings, and more.

So with Disney On Ice resuming their indoor showings, could Disney World also bring back some of their popular shows — such as Indiana Jones Epic Stunt Spectacular!, Voyage of The Little Mermaid, or even Fantasmic!?

Well, let’s dive in and see what Disney World could possibly do in order to bring some of these shows back to Guests.

It is important to note that Disney On Ice is not run by Disney so this is pure speculation.

Which Shows Could Return and How?

Fantasmic! is a nighttime spectacular at Disney’s Hollywood Studios that typically brings in a huge crowd. However, with an outdoor arena, limited capacity, and social distancing implemented in seating, Disney World could potentially resume this show as long as several safety measures are implemented.

Similar to Disney On Ice, reduced capacity would be essential to being able to resume this nighttime spectacular successfully. Another idea is Disney could implement advanced reservations, similar to the park reservation system, in order to maintain capacity, as well as possibly use “assigned seating” to guarantee social distancing.

It is important to note that Fantasmic! is still currently drained at Disney’s Hollywood Studios.

This live amusement show takes place on the other side of Disney’s Hollywood Studios, but also has an outdoor arena. Similarly to how Disney could resume Fantasmic!, we can also see them bringing this stunt show back as well. The only big modification they would have to make in order to make this successful is to eliminate the audience interaction portions of the show, but overall, we think this could be successful as long as the social distancing and other safety protocols are put into place.

After much speculation of this show being replaced, Disney recently confirmed with Inside the Magic that this show isn’t leaving. Therefore, we think Disney could resume showings of Voyage of The Little Mermaid, despite the theater being indoors.

The arenas that host Disney On Ice are indoors, so if Disney follows the same precautions and safety measures as Disney On Ice, we don’t see why Voyage of The Little Mermaid can’t resume as well.

Disney’s Hollywood Studios is easily one of the busiest parks now that Disney World has reopened to the public. With Toy Story Land, Star Wars: Galaxy’s Edge, and the newly opened Mickey and Minnie’s Runaway Railway, everyone is trying to snag a park reservation for Hollywood Studios.

Because of this — and the fact that there are not as many attractions at DHS as there are at Magic Kingdom, for example — wait times are typically much higher than the other three theme parks. But if Disney World is able to bring back some of the popular shows, such as Indiana Jones Epic Stunt Spectacular!, Voyage of The Little Mermaid, or even Fantasmic!, it could decrease wait times for other popular attractions including Millennium Falcon, Mickey and Minnie’s Runaway Railway, and Tower of Terror.

Do you think Disney World should bring back these shows? Let us know in the comments below.