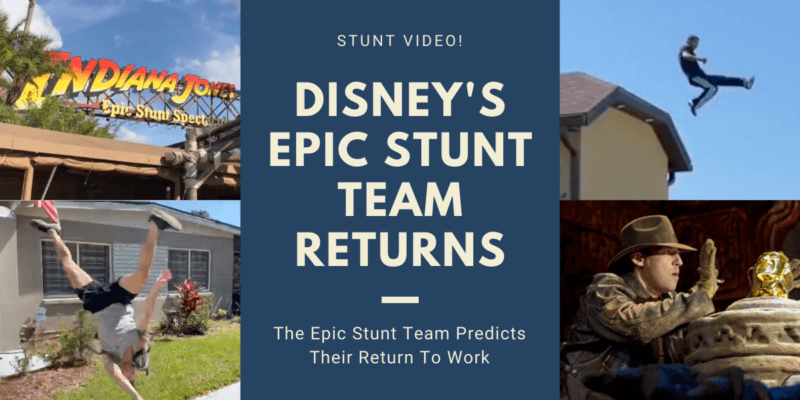 “FIVE MINUTES TO PLACES!” an announcer blares out. To anyone in the theatre business, that means get your booty to stage!! You’re on! The Indiana Jones Epic Stunt Spectacular has a team of many to help produce the show we all know and love. But during this time of stay at home, Disney’s Epic Stunt Team is doing anything but sitting still.

The Epic Stunt Team made up of Indiana Jones Cast and Crew, put together a video of themselves rushing back to work. Of course, the Parks are not open right now, but like Cinderella said, “They can’t stop me from dreaming!” Check out this dream video they cooked up and posted to YouTube.

The Epic Stunt team that performs in the Indy stunt show dreams up a return to work after the closures we have faced. Jam to this chase scene filmed and edited remotely by 24 people from the Cast and Crew. You’ll see a common thread of activity, yet different stuntmen (and women!) take part in each of the activities.

What a great way to still work together and still entertain the audiences you miss. Heck, we miss you, too, stunt peeps! We’ll see you real soon at Disney’s Hollywood Studios in Walt Disney World as soon as you open back up!

When We Go Back

When Walt Disney World opens up again (Shanghai Disneyland will lead the way), we’re hoping to snag a great seat at Indiana Jones Epic Stunt Spectacular. We’ll jump up and down fervidly while the host scans the crowd for volunteers to appear in the show. We’ll bring in buttered popcorn and a sticky soda, edging to the tip of our seats as the action we can already predict unfolds in front of us. Because we won’t take it for granted anymore. These are the things, the shows, the memories that make our Parks alive. We’ll see ya real soon, stunt team. Thank you for this fun video gift!

Do you watch the Indy show each time you’re at Disney’s Hollywood Studios? Leave us a comment below!

Comments Off on VIDEO: The Indiana Jones EPIC Stunt Team is Back In Action