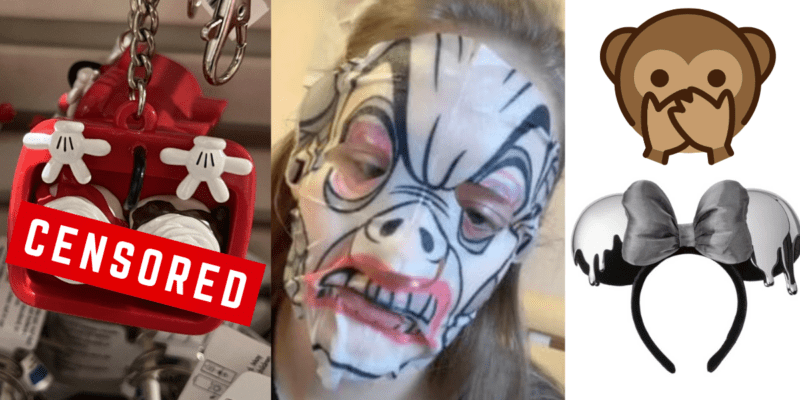 There’s nothing like a Disney Parks vacation. Whether you’re shrinking to the size of a toy in Toy Story Land at Disney’s Hollywood Studios at Walt Disney World Resort or flying with superheroes at Avenger’s Campus in Disney California Adventure at Disneyland Resort, you’re going to remember your Disney vacation forever. So why not bring home a souvenir to commemorate your trip?

Maybe your family likes matching t-shirts. Or you want to build a lightsaber in Star Wars: Galaxy’s Edge. Perhaps you collect pins and figurines, or your little one wants a cuddly Mickey Mouse plush to take home. The memento options are endless.

However, for all the times Disney gets it right… they’ve had their fair share of failures. Most recently, we reported on a D23 merchandise offering celebrating Walt Disney World Resort’s 50th Anniversary that took the Internet by storm.

Mickey Mouse and Minnie Mouse were a little too excited for the 50th Anniversary at Walt Disney World Resort. @Wario64 initially shared the platinum Mickey and Minnie Mouse ears, priced at $195 and $175, on Twitter:

The initial product description for the Minnie Mouse ears read:

Fans quickly took note of the reference to Minnie “dripping” and the unintended sexual innuendo. Following the posted links will now take you to the D23 Expo store on shopDisney, where the ears are nowhere to be found. It is uncertain if the limited release ears sold out or if Disney chose to remove the controversial items.

Something meant to be relaxing quickly turned into a nightmare. These Disney spa face masks – not to be confused with protective masks made during the COVID-19 pandemic – went viral on TikTok.

In 2018, one half of a couples tee shirt garnered attention on the “gaybros” subReddit. u/nailatixela shared a photo of a black tee shirt they spotted at Walt Disney World Resort that said “POWER:”

The shirt also featured a pair of Mickey Mouse pants, which many took to insinuate that the shirt read, “Power bottom.” The other half of the pair featured Minnie Mouse’s clothing and said, “Couple.” However, many Guests purchased just the Mickey Mouse shirt for the unintended sexual innuendo.

Some fans feel that due to staffing shortages and material delays during the ongoing COVID-19 pandemic, Disney merchandise has gotten “lazy.” In one incident, so-called “lazy” merchandise made for yet another unintended innuendo.

Might wanna reconsider the design of these keychains from WaltDisneyWorld

The photo features keychains inspired by the “Kitchen Sink,” a beloved Disney Park ice cream sundae from the Plaza Ice Cream Parlor on Main Street, U.S.A. at Magic Kingdom. However, the appearance of the two cherries on top of two dollops of whipped cream made Disney fans think of a certain part of the female anatomy.

The most egregious example, according to the Disneyland Resort Guest, is a gray shirt made to resemble an outdated meme that read “there are two types of people” surrounding side-by-side photos of Disneyland Resort and Walt Disney World Resort. She says she “has no words” to describe how lazy the shirt is.

Additionally, the Guest feels that Disney merchandise designers rely too heavily on basic quotes that are meant to inspire the wearer. Slogans like “let’s work together” and “let your power shine” have the opposite effect, @alifacc2 says.

Once again, the Guest took issue with odd slogans. First, the Guest referred to a gray shirt featuring a faded Mickey head and castle that reads “my kind of place.”

The Guest felt uncomfortable with a children’s shirt featuring Disney Princesses that read “the future is mine.” She captioned this finding with “Ok whoever is deciding these phrases needs help. This feels weird to read.”

In this video, the most insulting piece of merchandise was a Minnie Mouse-inspired dress that @alifacc2 said felt cheaply made. The dress features an open-armed Minnie with the words “cuddle time,” and a creepy 3D cat emerging from the shirt pocket.

Have you seen any Disney merch fails?