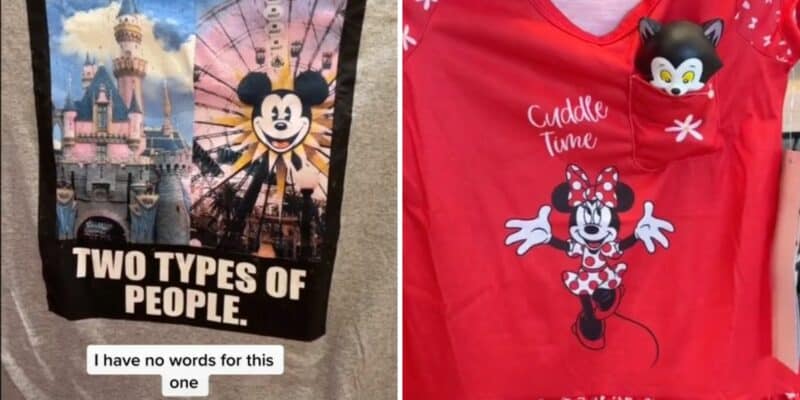 In a two-part series posted to TikTok, user @alifacc2 shared the “worst merchandise” she’s seen on her recent trips to the parks.

The first video posted back in May takes viewers on a merchandise tour in Disneyland in California, highlighting what @alifacc2 feels are glaring graphic design mistakes.

The first piece she takes issue with is a hat she claims makes no grammatical sense, displaying the phrase “change your world.” Next, she questions why anyone would wear a heather gray shirt featuring a winking Mickey inside a pink heart with the words “together again!”

She also took issue with an Up (2009) inspired necklace that she captioned was “huge and so ugly.” Next up was a shirt made to resemble a meme that read “there are two types of people” surrounding side-by-side photos of Disneyland and Disney World that she says she “has no words for.”

Lastly, she shared feeling less than inspired by merchandise meant to have the opposite effect, with quotes like “let’s work together” and “let your power shine.”

This week, she followed up her Disneyland merchandise fail video with part two, this time featuring the worst of Walt Disney World in Florida.

First up on @alifacc2’s chopping block is a grey shirt with a faded Mickey head and castle that reads “my kind of place.”

A kids shirt containing various Disney Princesses with the words “the future is mine” left her feeling uncomfortable, as she captioned the finding with “Ok whoever is deciding these phrases needs help. This feels weird to read.”

A similar shirt that read “shine bright today” was another fail for @alifacc2. “We could’ve just put shine bright, the today was not needed,” she captioned.

A j’adore Mickey water bottle and a vintage action figures bag left her feeling underwhelmed before she once again expressed her disdain for the quotes displayed on recent merchandise items. “These quotes are hurting me,” she wrote. “They feel so robotic.”

She ended the follow-up video with what she shared was a cheaply made dress that felt “entirely off.” The dress boasts an open-armed Minnie with the words “cuddle time,” and a 3-dimensional cat emerging from the shirt pocket.

What do you think about Disney Parks’ latest merchandise? Are they more hit or more miss?