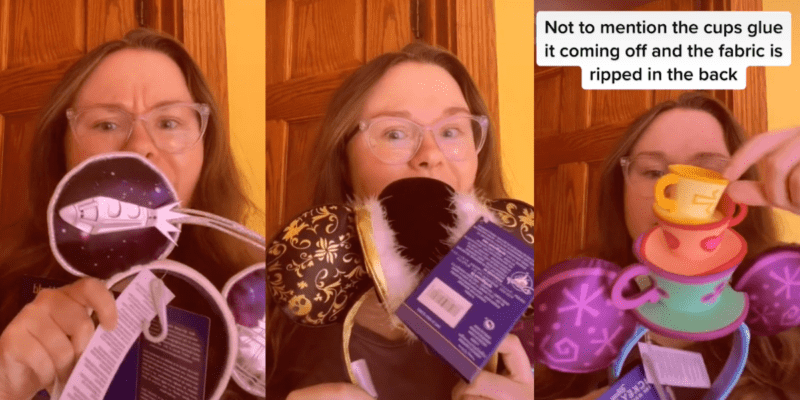 shopDisney is a one-stop shop for Disney fans of all ages. From Princess dresses to the famous $250,000 Arribas crystal castle, just about any wish your heart makes will come true!

Unfortunately, some fans are noticing a sharp decline in shopDisney’s merchandise quality. @Lindseyindisneyy shared a video asking if anyone else felt that shopDisney’s quality has “gone into the toilet,” starting a trend of frustrated Disney fans showing off less-than-spectacular merchandise.

In the video, the Disney fan shows off the first three ears from the collection, themed after Space Mountain, Pirates of the Caribbean, and Mad Tea Party.

She notes that the Space Mountain ears are slightly lopsided. “Are they the most round? Not really. But they’re really cute. I liked them, so I bought the second pair,” the Disney fan said.

“Get a good look at that ear right there. That’s not round,” she said. “The other ear is not that great either. I wasn’t that happy with this, but I was like, ‘I’m still gonna continue to collect the collection.'”

The Disney fan was floored when she received the Mad Tea Party ears from shopDisney.

“What is this? Ears, not round. And this? This is craft foam from Michael’s,” she said. “An Etsy seller could’ve taken this and made it so much better for half the price.”

Over the video, she added text saying that the glue on the cups is already coming off and some of the fabric on the back of the ears is ripped.

The Disney fan also noted that each pair of ears is $35 plus tax and $7 shipping.

At the end of the video, she pleads for shopDisney to provide better merchandise, saying “Come on, Disney!”

Have you noticed poor quality shopDisney merchandise? Let us know in the comments.

Please note that the story outlined in this article is based on a personal shopDisney experience. No two experiences are alike, and this article does not necessarily align with Inside the Magic’s personal views on shopDisney quality and operations.