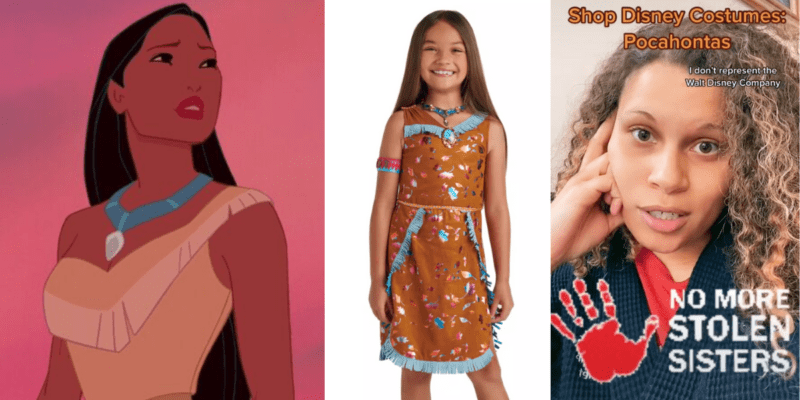 Pocahontas (1995) has been involved in a slew of controversies since its release nearly three decades ago.

Namely, it portrays a romantic relationship between Pocahontas and John Smith, which is historically inaccurate. Historians are unsure whether Pocahontas truly saved Smith’s life as she does in the film.

In reality, the age difference between the pair was much larger. Though she’s portrayed as a young adult in the film, Pocahontas would’ve only been 10 or 11 when Smith, 28, arrived in Virginia.

In real life, Pocahontas married John Rolfe, who took her back to England and cruelly exhibited her as a kind of sideshow attraction. Disney does correct this in Pocahontas II: Journey to a New World (1998), but doesn’t truthfully portray Rolfe as violent and hateful.

Of course, for many young Americans, it was the first time they’d seen a Disney film based entirely around a woman of color. Aladdin (1992) featured Princess Jasmine but was mainly focused on its titular character.

That was the case for one young Disney fan, who later became a Disney Cast Member. Tiktok user @helenjp1313 shared a video discussing her memories of Pocahontas and idolizing her as a fellow young girl of color. She mentions that she even dressed up as Pocahontas at one point and understudied her in a stage role.

However, this former Cast Member says it’s time to move past that. She shared a photo of a Pocahontas costume for kids on shopDisney, which is notably very different from Pocahontas’ on-screen outfit.

“I think it’s also okay to admit that I used to do things that were inappropriate, but now I know better. It’s never too late to learn,” she writes.

About the costume, the former Cast Member says, “We should know better now. First off, this doesn’t really look much like her costume and and the biggest problem with this is that the further away you get from the screen-accurate costume, the more it is just a really awkward, generic Native American cosplay.”

“I think we can appreciate that,” she notes about the representation Pocahontas provided to young girls of color in the 1990s. “And simultaneously say, let’s stop producing merchandise with her on it.”

“It’s time to stop treating her like a regular Disney princess,” she writes.

Starring Irene Bedard as Pocahontas and Mel Gibson as John Smith, Pocahontas made nearly $350 million when it hit the box office in 1995. From Disney:

The extraordinary life and indomitable spirit of a truly remarkable Native American heroine inspired the artistry and storytelling magic of Walt Disney Animation Studios’ Pocahontas. This musical adventure combines historical fact with popular folklore and legend to present the compelling tale of a brave, compassionate and dynamic young woman who “listens with her heart” to help her choose which path to follow. With the guidance and wisdom of her beloved Grandmother Willow and the friendship of Captain John Smith, Pocahontas is inspired by a real-life American legend.

Do you think Disney should sell Pocahontas costumes and merchandise? Let us know in the comments.