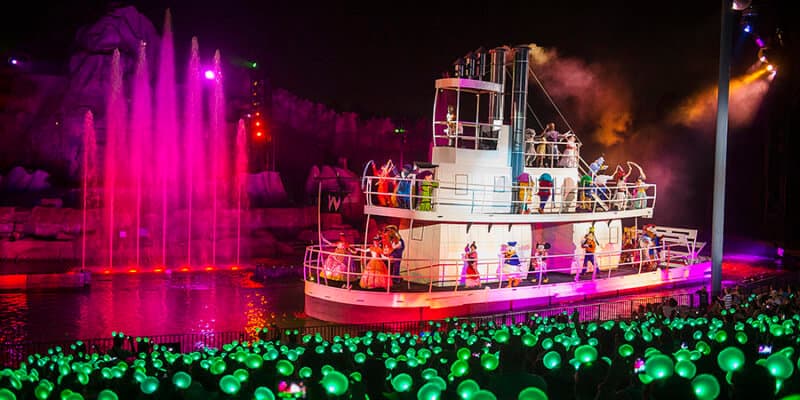 Fantasmic! will be returning to Walt Disney World soon — but with changes!

Earlier today, we reported on changes announced to Fantasmic! upon its return to Disney’s Hollywood Studios this year. The Disney Parks Blog wrote:

However, it was not known where these additional scenes would be placed in the show. This afternoon, Nexstar reporter Scott Gustin broke the news that the Pocahontas scene would be removed from Fantasmic!, and the new sequence would replace that time slot in the show.

Additionally, the new scene will feature multiple Disney characters who get their own moment: Mulan, Elsa, Aladdin, Moana, and even Pocahontas herself.

Finally, Gustin reported that this scene will be slightly longer than the former Pocahontas scene. His tweet reads:

The new sequence will replace the existing Pocahontas scene. The scene will feature multiple characters – and each will have their own moment during the new scene. It will also replace the scene at that specific slot in the show. Also, it’s a bit longer than the current scene.

The new sequence will replace the existing Pocahontas scene. The scene will feature multiple characters – and each will have their own moment during the new scene.

It will also replace the scene at that specific slot in the show. Also, it’s a bit longer than the current scene.

For more information on when you can see this updated version of Fantasmic! at Disney’s Hollywood Studios, check out this article.

More on Pocahontas in Fantasmic!

Since the beginning, Pocahontas has been in Disney’s Hollywood Studios’ version of Fantasmic!, appearing after a lost and confused Mickey Mouse gets caught in a whirlpool. The stage darkens, and a giant cannon blast erupts. The set is suddenly filled with light, and Gov. John Ratcliffe fights side by side with other Englishmen against John Smith and a group of Native Americans.

The battle continues, and John Smith is almost defeated when Pocahontas appears at the top of Fantasmic!’s towering mountain. The lights dim, and water projections show the “Color of the Wind” scene from the film Pocahontas. A large cannon blast at the end of the scene has been known to spook new Disney Guests!

Though Disney’s Hollywood Studios’ Fantasmic! almost always plays to a packed arena, fans have been eagerly waiting for an update to the show ever since Disneyland Resort updated its version in 2016 for the show’s 30th birthday. Previously, it was closed due to construction of Star Wars: Galaxy’s Edge.

What do you think about the changes to Fantasmic!?