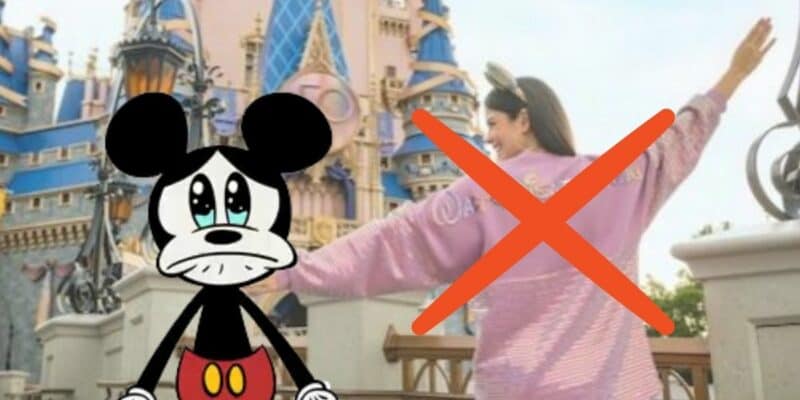 As Walt Disney World Resort’s 50th-anniversary celebration is well underway, highly anticipated merchandise has finally arrived at the Resort and online at shopDisney.com. But a huge backlash following the delivery of wrong items to eager fans may have prompted Disney to remove these items completely from the online sale area.

Fans remained curious since advertisements for the purple and pink garment showed a classic puff lettering on the backside and an embroidered logo on the front, yet was displayed for sale with sequin lettering. Nevertheless, fans ordered them, wanting a piece of the birthday celebration for themselves.

As the items began to arrive, customers opened the boxes to find “fake” versions of what they ordered, with incorrect Park names, or generic replacements. Of course, they were upset (some calling themselves irate), but they were without help as shopDisney continued to claim they had the correct items and SKU numbers.

A particular fan took to TikTok to warn shoppers of the mix-ups, and commenters fell in line with complaints of their own and widespread stories of similar happenings with this particular piece of merchandise. Twitter is flowing with similar stories. Twitter user Nicola mentioned to shopDisney,

“How come there’s a big problem with so many orders of the iridescent spirit jersey WaltDisneyWorld & they all receive a whole different design,but when check that customer service the SKU number matched but it’s the wrong design.can this corrected, cause so many calls are comin”

How come there's a big problem with so many orders of the iridescent spirit jersey WaltDisneyWorld & they all receive a whole different design,but when check that customer service the SKU number matched but it's the wrong design.can this corrected, cause so many calls are comin pic.twitter.com/YwoaEOxEzy

So what did shopDisney do about it? Other than nearly gaslight all their shoppers, they took the EARidescent Spirit Jerseys off the site completely, with nary a “sold out” comment, but instead, dead-end links and google results to a Wreck it Ralph 404 error.

Other 50th-anniversary merchandise is for sale, but the EARidescent Spirit Jerseys for both Walt Disney World Resort and Disneyland Resort have been removed. Of course, if you are an in-store shopper on either cost, it will be easy for you to choose the correct garment for you, but until shopDisney gets their Princesses in a line, they will be hearing complaints from unhappy shoppers.

Did you receive the incorrect Spirit Jersey from shopDisney? Or are you trying to get the one you want from home? Leave us a comment below!