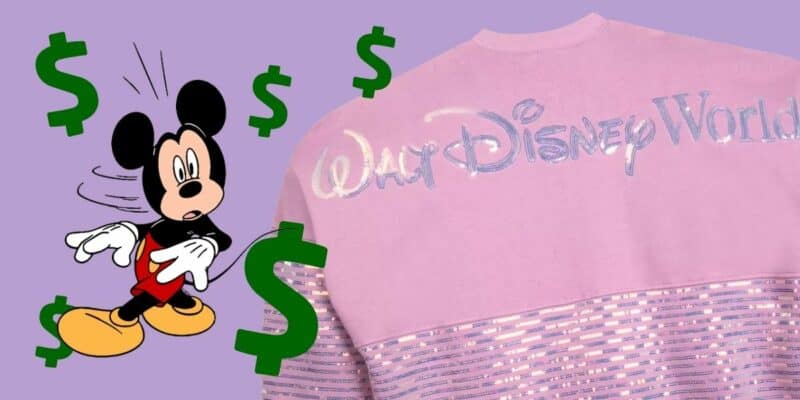 Disney’s Spirit Jerseys for both Disneyland Resort and Walt Disney World have not only become fashion pieces but also collectibles. With the mad rush on Disney World’s 50th-anniversary merchandise, the appearance of the new EARidescent Spirit Jersey has been long-awaited. Now that it’s finally here, Disney fans are balking at the enormous cost.

Disney World’s EARidescent Spirit Jersey is Finally Here, And The Cost is Outrageous!

Ever since this EARidescent Spirit Jersey was spotted during a photoshoot this summer, Disney fashionistas everywhere have been clamoring for its release. The light purple, shimmering look pairs well with the EARidescent Minnie Mouse Ears that have been snatched up in the Florida Disney Parks, and while supply chain issues and shortages have plagued the release of the matching Spirit Jersey, it’s finally here.  (It’s worth noting that Disneyland also has this same look, but without the 50th emblem).

Debuting on shopDisney the same day it’s becoming available in the Parks, Disney fans woke up to sticker shock as the price of this new Spirit Jersey is soaring above the rest. Normally, a Disney Spirit Jersey will be priced at $74.99 (or if it’s fuzzy, approximately $80), already a jump from the previous years’ prices at about $60.00.

This fabulous celebration outfit top is retailing online for $120.00, and that’s $45.00 more than normal, and that’s not sitting too well. Knowing that scalpers are already snatching up these items, fans are irritated with how much those will be selling for on eBay, as Disney makes a poor attempt to cancel these resellers.

Take flight to The Most Magical Place on Earth in this commemorative Spirit Jersey with sparkling, sequined Walt Disney World logo across the back shoulder and rows of sequined stripes on midsection and sleeves, plus puffy Walt Disney World 50 logo on chest.

To take care of this particularly special Disney Spirit Jersey, you’ll want to care for the finishing stitches and the unique color. Disney notes on the shopDisney page the finishing effects of this garment may fade or change with home laundering and after UV exposure. In layman’s terms, don’t wear it in the direct sun for long, and you’ll want to wash the garment inside out (gentle cycle, lay flat to dry).

Will you be purchasing this EARidescent Spirit Jersey online or in the Parks? Leave us a comment below!

Comments Off on Disney World’s EARidescent Spirit Jersey is Finally Here, And The Cost is Outrageous!